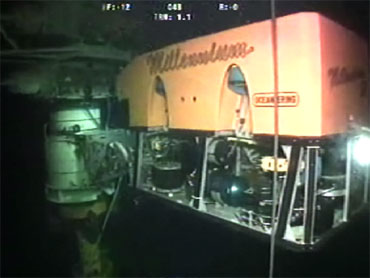 BP allayed last-minute government fears of making the disaster worse and began testing the new, tighter-fitting cap Wednesday that could finally choke off the oil leak in the Gulf of Mexico.

After an intense day of review and debate, the test was green-lighted this afternoon, reports CBS News anchor Katie Couric. Testing was delayed because scientists worried about putting too much pressure on the drill pipe and wellbore below the sea floor.

"What we didn't want to do is compound that problem by making an irreversible mistake," said Retired Coast Guard Adm. Thad Allen, the Obama administration's point man on the disaster, at the end of a 24-hour roller-coaster of hopes raised, hopes dashed and hopes raised again along the Gulf Coast.

The cap - a 75-ton metal stack of pipes and valves - was lowered onto the well on Monday in hopes of either bottling up the oil inside the well machinery, or capturing it and funneling it to the surface. But before BP could test the equipment, the government intervened because of second thoughts about whether the buildup of pressure from the gushing oil could rupture the walls of the well and make the leak worse.

"We sat long and hard about delaying the tests," Allen said. He said that the pause was necessary in the interest of the public, the environment and safety, and that officials were convinced the test could go forward.

The test began with BP shutting off pipes that were funneling some of the oil to ships on the surface so the full force of the gusher went up into the cap. Then deep-sea robots began slowly closing, one at a time, three openings in the cap that let oil pass through. Ultimately, the flow of crude will be blocked entirely. All along, engineers will be watching pressure readings to learn whether the well is intact.

Allen said BP will monitor the results every six hours and end the test after 48 hours to evaluate the findings.

The one-day delay came just when it looked as if the Gulf oil crisis was nearing an end. The holdup was met with disappointment along the Gulf Coast.

White House spokesman Robert Gibbs said the government acted "out of an abundance of caution to do no harm," and added that he did not consider the delay to be "some giant setback."

BP stock was down more than 2 percent in afternoon trading in London on news of the delay after recouping some of its losses earlier this week when the cap project seemed to be moving ahead.

With the testing on hold, oil continued to spew nearly unimpeded into the water. Two vessels on the surface collected about 700,000 gallons on Tuesday, BP said. The government estimates 1.5 million to 2.5 million gallons are leaking every day.

After the test was delayed, BP said it was also halting drilling for 48 hours on the two relief wells that are intended to plug the gusher permanently from deep underground. The company said it was stopping the work because it was not clear what effect the testing of the cap could have on it.

Before BP got the go-ahead for the cap test, BP Chief Operating Officer Doug Suttles urged Gulf residents to be patient.

"We're going to get this thing stopped as fast as we can," he said. "If it is not in the next couple of days with the test, we'll do it with the relief wells."

Tony Wood, director of the National Spill Control School at Texas A&M-Corpus Christi, said the government's caution is a prudent course, because so much of the work being contemplated is uncharted territory.

Wood said trapping the erupting oil in the cap could increase pressure inside the casing, or the piping inside the well, and could fracture it until it is leaking like a sieve. That could make it impossible to plug up the well.

The caution follows a string of failed attempts by BP to contain the leak, including the use of a giant concrete-and-steel box that quickly became encased in ice-like crystals; a colossal siphon tube that trapped very little oil, and an effort to jam the well by pumping in mud and shredded rubber.

As of Wednesday, the 85th day of the disaster, between 92 million and 182 million gallons of oil had spewed into the Gulf since the Deepwater Horizon rig leased by BP exploded April 20, killing 11 workers.