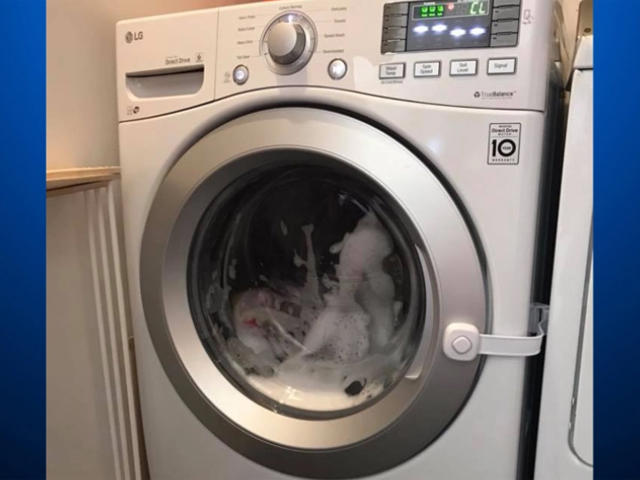 CONIFER, Colo. -- A Colorado mother posted a scary warning on Facebook after purchasing a front-loading washing machine, CBS Denver reports. Lindsey McIver admitted she was hesitant to share her story — "First, because of the inevitable online mom-shaming that is bound to ensue; and second, because it's just really hard to re-live."

McIver said the family washing machine broke down earlier this month, and she and her husband bought a replacement.

"We thought it was the 'new and cool' type of washing machine and didn't think anything of it. We spent that evening installing it with the kids underfoot. We told them several times that they were not to touch it," McIver said. "They all replied 'OK."'

McIver said her 4-year-old son woke her up early one morning, "crying so hard he could barely talk."

"As I was trying to understand what he was saying, my husband flew out of bed and down the stairs. It was then that the realization hit," McIver wrote. "He had said: 'Kloe. Inside. Washer."'

McIver said when they reached the laundry room in the basement, they found their 3-year-old daughter locked inside the washing machine — and it was tumbling and filling with water.

"She was screaming but you couldn't hear her," McIver wrote.

Fortunately, they were able to stop the machine and Kloe only suffered a couple of small bumps on her head.

"After going through all the 'what if's' and 'could haves,' we know we are very blessed and God had mercy on our sweet daughter," McIver said.

"I post this because I can honestly say we did not realize the danger of this machine," McIver wrote. "We are continually surprised at the new, inventive ways our kids come up with to try and die. And this was definitely a new one."

McIver said after the incident, they found a child lock feature in the settings that, if engaged, doesn't allow the machine to start.

"I want to encourage anybody who has this type of front loading washing machine and small children, or even grandkids who visit, to lock the door with a child safety lock and always keep the child lock setting on!" McIver wrote.

McIver said she'ss been beating herself up about not taking more precautions, but said, "We need to be open and honest about our mistakes to help one another keep our kids safe."

"This is the season for swimming pool accidents and kids being left in hot cars and all sorts of other horrible accidents. And that's what most of them are. Accidents. Shaming the mom doesn't do anyone any good," McIver wrote. "And trust me, that mom is already beating herself up enough."