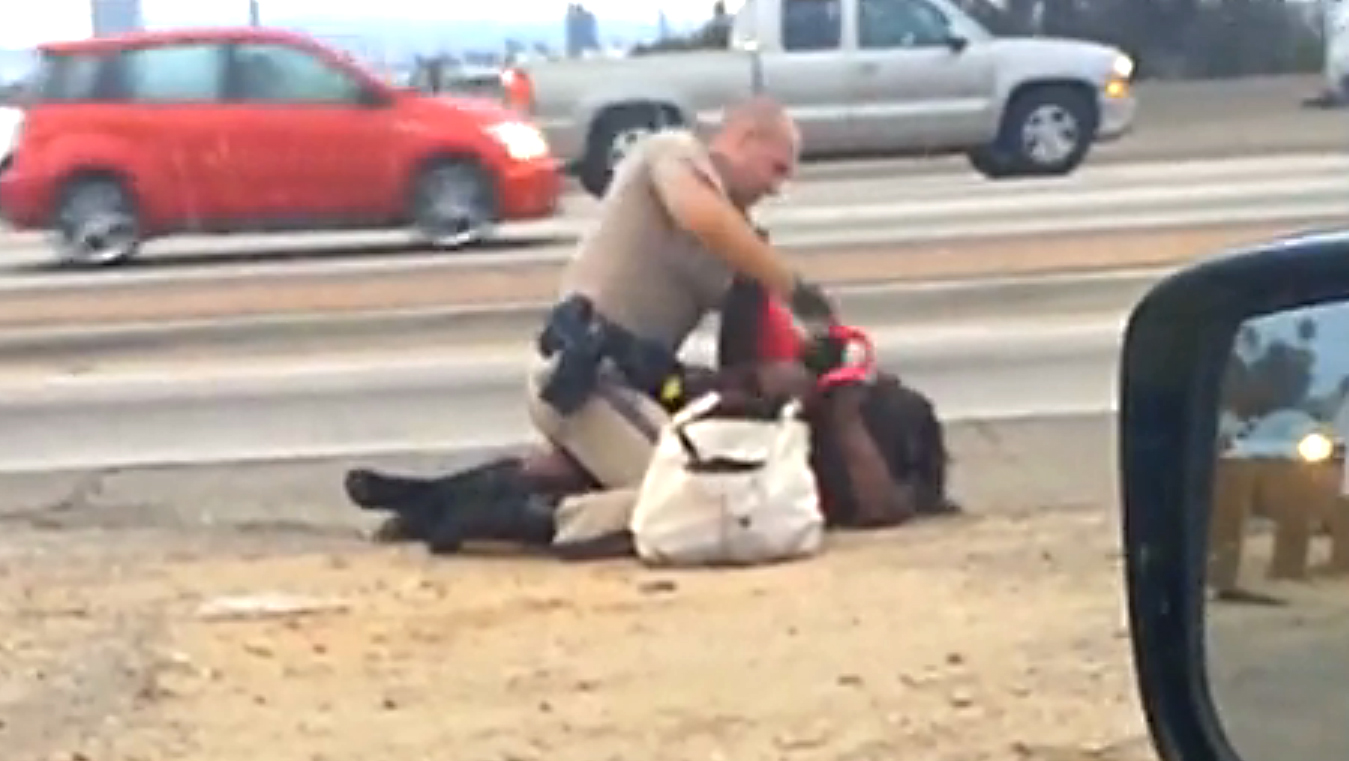 LOS ANGELES The California Highway Patrol has vowed to carry out a thorough investigation after a video emerged of one of its officers repeatedly punching a pinned-down woman on the side of a Los Angeles freeway.

The woman had been walking on Interstate 10 west of downtown Los Angeles, endangering herself and people in traffic, and the officer was trying to restrain her, CHP Assistant Chief Chris O'Quinn said at a news conference. O'Quinn said the woman had begun walking off the freeway but returned when the confrontation occurred.

The video shows the woman struggling and trying to sit up while the officer punches her in the face and head until an off-duty law enforcement officer appears and helps him handcuff her.

Passing Driver David Diaz recorded the Tuesday incident and provided it to media outlets. He described the incident as "excessive" and "unnecessary" to CBS News correspondent Teri Okita.

The officer is seen following the woman, who was barefoot and appeared disoriented - onto the freeway shoulder. When she ignored his commands to stop, Diaz said the situation quickly escalated.

"He grabs her and she kind of shuns him back - a very natural instinct. Of course he stronger than her so he grabs her, throws her down," Diaz said.

"With every punch, it's bouncing her head off the concrete."

The officer is on administrative leave while the patrol investigates. He has not been identified.

Late Saturday, attorney Caree Harper held a news conference at a Los Angeles hospital and told reporters the woman seen being punched on the video is Marlene Pinnock.

Harper said any investigation into the incident could only conclude one thing.

"She got beat, she got savagely beat by someone who seemed to be trying out for mixed martial arts," Harper said. "And it's unacceptable."

The video caught the attention of local civil rights leaders, who expressed shock and outrage at their own news conference.

"Speaking for the women of this community, we are angry, we are upset," said Lita Herron of the Youth Advocacy Coalition.

O'Quinn said the CHP would answer community concerns, and that an investigative team already has been assembled and has begun its work.

"We are known as an agency that really polices itself," O'Quinn said.

"Over the years, CHP has had a very good track record in terms of community relations," Hutchinson said. "That's why this was so shocking."

But Hutchinson said that "excessive force, abuse of authority, is not going to be tolerated," calling for a federal investigation and for the officer to be immediately suspended pending the results of the federal probe, reports CBS Los Angeles.

Hutchinson said the group has not received any information from the CHP about the context of the video, although he could not think of a reason that could justify the officer's actions.

"We don't know at this point [what occurred before the recording]. The only thing we have [is] the video," he said, insisting that no matter what transpired "the officer crossed the line."

"To subdue, that's one thing. But to beat, that's another thing," Hutchinson said.

O'Quinn said the incident report listed no injuries for the woman, who would not give her name to officials. She is undergoing psychiatric evaluation, he said.

O'Quinn said he could not say what prompted the officer to act as he did. But he noted California Highway Patrol officers have a heightened sense of the dangers of being on the freeway compared with a citizen "who is not accustomed to the speed and conditions," especially outside of a car.

"I can say that the tape only shows a small part of what transpired. There are events that led up to this. Until that's collected and put into -- perspective, we aren't going to be able to make a determination."