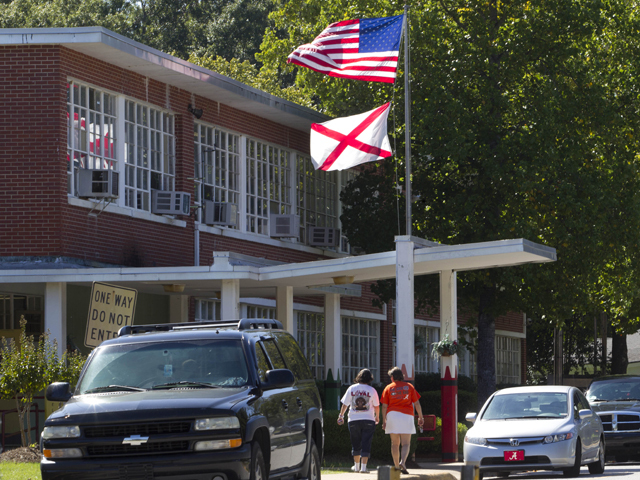 BIRMINGHAM, Alabama - It was just another schoolyard basketball game until a group of Hispanic seventh-graders defeated a group of boys from Alabama.

The reaction was immediate, according to the Mexican mother of one of the winners, and rooted in the state's new law on illegal immigration.

"They told them, `You shouldn't be winning. You should go back to Mexico,"' said the woman, who spoke through a translator last week and didn't want her name used. She and her son are in the country illegally.

Spanish-speaking parents say their children are facing more bullying and taunts at school since Alabama's tough crackdown on illegal immigration took effect last month. Many blame the name-calling on fallout from the law, which has been widely covered in the news, discussed in some classrooms and debated around dinner tables.

Justice Department officials are monitoring for bullying incidents linked to the law.

"We're hearing a number of reports about increases in bullying that we're studying," the head of the agency's civil rights division, Thomas Perez, said during a stop in Birmingham.

The Justice Department has established a bilingual telephone hotline and special email account for residents to report any violence or threats based on racial or ethnic background that could be linked to the law. Officials would not provide a breakdown on the types of complaints being received.

Yet the Alabama Department of Education hasn't received any reports of bullying linked to the law, said spokeswoman Malissa Valdes, and it isn't tracking the issue to determine whether there could be a problem. Any parents who call the state with complaints would be referred to their child's principal, she said.

Federal officials say some parents — particularly illegal immigrants — may not report bullying to teachers and principals because they fear coming into contact with government officials.

Supporters of the law — which is being challenged by the Obama administration, individuals and private groups — contend it's vital to reducing the cost of state and local government by getting illegal immigrants off public assistance. They also argue the measure will create jobs for legal residents by opening up positions that had been held by people living in the country illegally. However, Americans so far have shown little interest in the backbreaking, low-paying jobs at farms and poultry factories that were usually held by illegal immigrants.

Opponents contend the law is creating a climate of fear and mistrust in the state that's unsettling for immigrants who are both legal and illegal. Immigrants tell of dirty looks in grocery stores, and online forums are full of angry, anonymous comments from both supporters and opponents of the law.

Machine shop manager Hector Conde said his family has seen the problem firsthand. Conde, whose family lives in Autauga County north of Montgomery, was appalled when his 12-year-old daughter, Monica Torres, told him a schoolmate called her a "damn Mexican" during a school bus ride.

"She is a citizen. She doesn't even speak Spanish," said Conde, a U.S. citizen originally from Puerto Rico. "The culture being created (by the law) is that this sort of thing is OK."

A Hispanic woman said her 13-year-old niece was called a "stupid Mexican" and told to "go back to Mexico" by a classmate in Walker County.

"She said, `If you're not going I'm going to punch you,"' said the woman, who spoke through a translator and didn't want her name used.

Courts have struck down sections of the law, including a provision that required public schools to verify the citizenship status of students. Other sections remain in effect, including a part that lets police check a person's immigration status during a traffic stop. Courts also can't enforce contracts involving illegal immigrants, such as leases, and it's still a felony for an illegal immigrant to do business with the state for basic things like getting a driver's license.

In Shelby County, where hundreds of Hispanic children are enrolled in schools in Birmingham's southern suburbs, officials say they've had few reports of conflicts between Hispanic students and others.

"That isn't to say that it hasn't happened, but if it has they haven't been reporting it to school officials," said Cindy Warner, a spokeswoman for the system.

U.S. Attorney Joyce Vance, the lead federal prosecutor for north Alabama, said many Hispanic parents may be afraid to report bullying for fear of coming in contact with government officials. Under the law, authorities are supposed to detain suspected illegal immigrants found living in the state and hold them for federal immigration authorities.

Parents may be afraid to even go to school teachers and principals, she said. "It seems likely to me that people are trying to keep their heads down and stay out of trouble," said Vance.

Charles Warren is school superintendent DeKalb County, where about 18 percent of the 8,900 students enrolled in public schools are Hispanic. He doesn't see much tension between Hispanic students and others — Crossville High School has had a Hispanic homecoming queen the last two years, he said.

"The kids get along great, it's the adults who are the problem," Warren said. "There are a lot of similarities to what went on back in the `50s and `60s with the civil rights movement. A lot of people are out of work now and they want to blame someone. I think the Hispanic people are catching a lot of that."

Warren is right about at least one thing: The taunting extends to the grown-up world. Supporters of the law have filled Steve Dubrinsky's email account with critical messages and peppered online message boards with negative reviews of his popular restaurant, Max's Delicatessen, after a talk radio show mistakenly said he employs illegal immigrants at his business in suburban Birmingham.

Dubrinsky's wife is a legal immigrant from Mexico, and he said all nine of his immigrant workers have proper papers. But he is still worried about the future of his business amid the onslaught.

"I've never experienced anything like this before," said Dubrinsky. "Those reviews were just plain and simple out to get me over this."