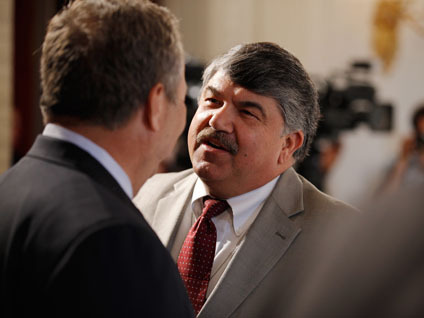 Amid growing tension between the labor movement and the Obama administration, AFL-CIO president Richard Trumka said Thursday that labor was starting to build its own political structures "that work for the people" - and that as a result, "You're going to see us give less money to build structures for others."

The AFL-CIO, the largest federation of unions in the U.S. and an historically strong backer of the Democratic party, recently announced the formation of a so-called "super labor PAC," which would enable the federation to both raise money outside its traditional membership base, and engage more powerfully in state legislative battles. It also seems to signify labor's growing desire for independence from the Democratic establishment.

"The essential idea is that changes in the law for the first time really allow the labor movement to speak directly to workers, whether they have collective bargaining agreements or not," AFL-CIO political director Michael Podhorzer told the Associated Press, of the idea behind forming the super PAC. "Before, most political resources went to our own membership."

Speaking to reporters at a breakfast hosted by the Christian Science Monitor on Thursday, Trumka argued President Obama had made a "strategic mistake" in talking about job creation and the deficit problem in the same breath, and that, as a result, "people got the two confused."

"I think he made a strategic mistake when he confused job crisis with the deficit crisis a number of months ago -- when he would talk about job creation and then the same sentence talk about deficit reduction and people got the two confused," Trumka said. "I think that was a strategic mistake. And he started playing on the Republican ground."

Trumka also expressed skepticism regarding Mr. Obama's recent job creation proposals, and indicated that in the absence of a program he considered effective, "I think we'd better use our money doing other things." He noted that many in the labor community were considering sitting out the 2012 Democratic convention.

"This is a moment that working people and quite frankly history will judge President Obama on his presidency; will he commit all his energy and focus on bold solutions on the job crisis or will he continue to work with the Tea Party to offer cuts to middle class programs like Social Security all the while pretending the deficit is where our economic problems really lie?" Trumka asked at the breakfast, as TPM reports.