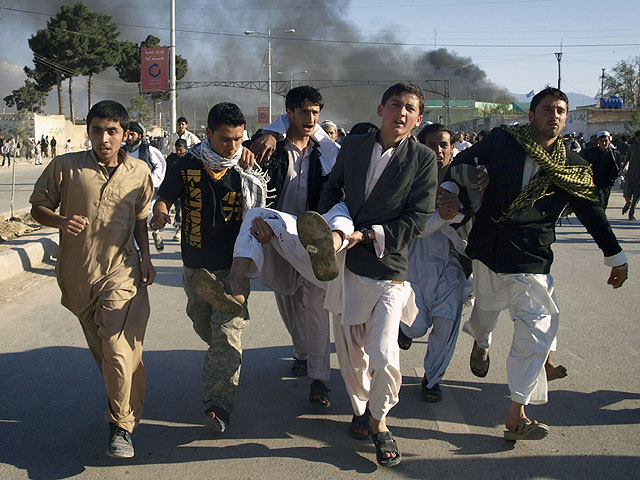 KABUL, Afghanistan - Thousands of protesters angry over the burning of a Quran by a Florida pastor stormed a U.N. compound Friday in northern Afghanistan, killing at least 11 people, including seven foreigners. The desecration of the Muslim holy book fueled resentment against the West at a critical moment in the Afghan war.

The demonstration in Mazar-i-Sharif turned violent when some protesters grabbed weapons from the U.N. guards and opened fire, then mobbed buildings and set fires on the compound, officials said. Demonstrators also massed in Kabul and the western city of Herat.

An Afghan official said police have arrested the suspected mastermind behind the attack.

Rawof Taj, deputy police chief in Balkh province, said he was among the more than 20 people arrested after the attack, adding that he was from Kapisa province, a hotbed of the insurgency about 250 miles southeast of Mazar-i-Sharif, where the attack occurred.

The United Nations Security Council said it will hold an emergency meeting on Friday regarding the deadly attack on the U.N. office in northern Afghanistan. Council diplomats said U.N. peacekeeping chief Alain LeRoy will brief members and the council will likely issue a strong condemnation of the attack.

The topic of Quran burning stirred outrage among millions of Muslims and others worldwide after the Rev. Terry Jones' small church, Dove Outreach Center, threatened to destroy a copy of the holy book last year. The Florida pastor had backed down but the church went through with the burning last month.

Munir Ahmad Farhad, a spokesman in Balkh province, said the protest in Mazar-i-Sharif began peacefully when several hundred demonstrators gathered outside the U.N. mission's compound, choosing an obvious symbol of the international community's involvement in Afghanistan to denounce the Quran's destruction.

It turned violent when some protesters seized the guards' weapons and started shooting, then the crowds stormed the building, sending plumes of black smoke into the air. One protester, Ahmad Gul, a 32-year-old teacher in the city, said Afghan security forces at the scene killed and wounded protesters.

Dan McNorton, a spokesman for the United Nations Assistance Mission in Afghanistan in Kabul, said Friday that four foreign security guards and three other foreigners were killed. Swedish Foreign Minister Carl Bildt said one of the dead was a Swede, 27-year-old U.N. worker Joakim Dungel.

The nationality of the other two victims was not known.

The Russian Foreign Ministry said P.O. Yershov, a Russian citizen who was employed at the U.N. office, was injured in an attack.

Staffan de Mistura, the top U.N. official in Afghanistan, had left Kabul for Mazar-i-Sharif to personally handle the situation, he said.

Secretary-General Ban Ki-moon, who is in Nairobi, said it was "a cowardly attack that cannot be justified under any circumstances."

Deputy U.N. spokesman Farhan Haq said "a fairly substantial number" of U.N. staff and guards had been killed, but he gave no figure. "Among the casualties we believe that some of them were guards trying to protect the other staff," he said.

Pastor Terry Jones of the Dove World Outreach Center, presides as judge over a mock trial of the Koran, at the Gainesville, Fla., church, Sunday, March 20, 2011.

President Barack Obama strongly condemned the attack and stressed the importance of work of the U.N. staff in Afghanistan.

"Their work is essential to building a stronger Afghanistan for the benefit of all its citizens. We stress the importance of calm and urge all parties to reject violence and resolve differences through dialogue," Obama said.

Mohammad Azim, a businessman in Mazer-i-Sharif, said that clerics with loudspeakers drove around the city in two cars on Thursday to invite residents to the protest. After Friday prayers at a large blue mosque in the city center, clerics again called on worshippers to attend a peaceful protest.

When Abdul Karim, a police officer in Mazar-i-Sharif, went inside the compound to investigate, he saw the bullet-riddled bodies of three Nepalese guards lying in the yard, and a fourth on the first floor.

He said another victim with a fatal head wound died on a stairway to the basement of the compound, which was littered with broken glass and bullet casings. A man who was killed inside a room had wounds to his face and body, Karim said.

Several hundred people also protested the Quran burning at several sites in Herat, a city in western Afghanistan. Protesters burned a U.S. flag at a sports stadium in Herat and chanted "Death to the U.S." and "They broke the heart of Islam."

About 100 people also gathered at a traffic circle near the U.S. Embassy in Kabul. Police directed traffic around the demonstration in the capital. One protester carried a sign that said: "We want these bloody bastard Americans with all their forces to leave Afghanistan."

The Gainesville, Florida church's website stated that after a five-hour trial on March 20, the Quran "was found guilty and a copy was burned inside the building." The torching of the book was part of an event Jones called International Judge the Koran Day, which was streamed live online and promoted on Facebook.

"We are of course very devastated by what happened," Jones told CBS affiliate WGFL in Gainesville, Fla. "It is terrible any time that a person is killed or murdered or even a life is cut."

However, Jones did not take responsibility for the tragedy.

"On the other hand we feel that we are not responsible and that people need to wake up and see this is how radical at least that element of Islam can be," said Jones.

The "jury" considered the charges of crimes against humanity; of promoting terrorist acts; of death, rape and torture of people worldwide "whose only crime was not being of the Islamic faith"; and of crimes against women, minorities and Christians, and with promoting prejudice and racism.

The trial featured as prosecutor a Christian convert from Islam. An Imam from Dallas, Texas, served as the book's defense attorney.

A picture on the website shows a book in flames in a small portable fire pit. The church on Friday confirmed that the Quran had been burned.

CBS News correspondent Kelly Cobiella said that in a phone conversation with CBS News, Jones said, "We personally do not feel any responsibility for the carnage in Afghanistan," without a hint of emotion in his voice.

In a statement, Jones said it was time to "hold Islam accountable" and called on the United States and the U.N. to hold "these countries and people accountable for what they have done as well as for any excuses they may use to promote their terrorist activities."

Last week, Afghan President Hamid Karzai issued a statement calling the burning a "crime against a religion." He denounced it as a "disrespectful and abhorrent act" and called on the U.S. and the United Nations to bring to justice those who burned the holy book and issue a response to Muslims around the world.