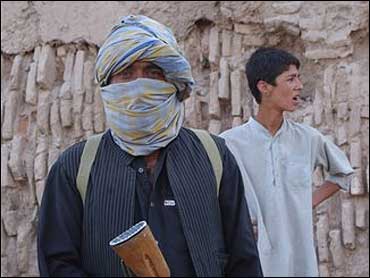 The village of Dashtak sits on a bumpy, washed-out specter of a road, an hour's drive off the main highway between Kabul and Afghanistan's lawless southeast.

It has 16 new wells financed by an aid agency. But the village men who gather around a visiting journalist offer a litany of complaints: no paved roads, no running water, no electricity, and the closest health clinic is two hours away by donkey.

Their frustration boils over when talk turns to 10 villagers recently arrested on suspicion of aiding insurgents.

"I swear to you, I have not seen a single dollar bill. I do not know its size or color," said Shah Mahmood, a 55-year-old with a long white beard and stark black turban. "We are dying from lack of food and water — and they call us al Qaeda or Taliban."

Five years into the U.S.-led war in Afghanistan, the country is far from won over, or even safely on the path to stability and democracy.

The hard-line Islamic Taliban that appeared down and out has returned with a vengeance, taking control of large swaths of countryside. Widespread poverty has smoothed its way, shaking what little confidence Afghans have in their democratically elected government.

More than 3,000 people have been killed in rising violence this year. Suicide bombers are targeting ordinary Afghans and Western troops. Militants are assassinating key political figures, burning down schools and using roadside bombs to deadly effect.

The 40,000 U.S. and NATO troops appear further away from bringing stability than they did three years ago when their number was 2½ times smaller. And Osama bin Laden, whose presence here was a trigger for the U.S.-led attack, is still at large, possibly hiding in the mountains along the Afghanistan-Pakistan border.

"This is likely to be a long war," said Seth Jones, an analyst with the U.S.-based RAND Corp.

That Afghanistan's future would remain in doubt today was almost unthinkable when the U.S.-led rout of the Taliban began on Oct. 7, 2001. The military campaign that captured Kabul, the capital, in just over a month resulted in a wave of optimism across Afghanistan, a country that had known little except war for a quarter century.

Emerging from the Taliban's repression, the nation embraced renewed freedoms.

Millions of Afghans voted for a new president in 2004 and parliament in 2005.

Afghan girls once banned from schools became free to attend class, and citizens could again fly kites or listen to music without risking the wrath of the Ministry of Vice and Virtue.

But despite billions plowed into new roads, clinics and schools, development lags in the volatile ethnic Pashtun areas in the south and east, and corruption has helped the Taliban to take root once again.

Making matters worse, drug production that was virtually wiped out by the Taliban by 2001 has skyrocketed. Afghan farmers grew enough opium in 2005-06 to make 610 tons of heroin — more than all the world's addicts consume in a year.

Profits go to Taliban supporters — and to corrupt government officials and police, who like teachers and soldiers, make only $70 a month.

"Our police are doing all of those crimes that they have a duty to stop," said Shamsul Haq, a 48-year-old grape farmer and car salesman from the Taliban's former seat of power in Kandahar.

And in some areas, there are no authorities to bribe. Said Jawad, the Afghan ambassador to the United States, noted that Uruzgan, a southern province about the size of West Virginia, has only 45 police officers.

"No one is checking into poppies because there is no police force," Jawad said. "(And) a person who enlists probably is already thinking about abusing his position."

When 8,000 NATO troops moved to the border area this year to extend the government's control, they were surprised by the intensity of the resistance, often in pitched battles.

More than 3,000 people, mostly militants, have been killed nationwide in 2006, according to an Associated Press count, based on reports from U.S., NATO and Afghan officials. The tally, also including Afghan security forces, officials and civilians, is about 1,500 more than the toll for all of 2005.

Western casualties have been rising, too — 152 foreign troops killed this year, according to the Web site icasualties.org that tracks foreign troop fatalities in Iraq and Afghanistan. That's almost triple the number of deaths in 2003 or 2004.

Of the 280 U.S. troops killed in Afghanistan since 2001, 69 have died in nine months this year. NATO countries Britain and Canada are reeling from recent losses, including 10 Canadians killed last month.

The war's cost for U.S. taxpayers: $97 billion, and Congress just appropriated $70 billion more for operations in Iraq and Afghanistan.

Unlike Iraq, where the United States makes up the overwhelming majority of the international force, Afghanistan is a broad coalition. The world's most powerful nations continue to work side by side in pursuit of the same declared aim: stabilizing the country and bolstering economic recovery.

But Richard Norland, the U.S. deputy ambassador to Afghanistan, said that the "sense of progress has kind of abated lately."

"You have these villagers in the remote part of distant provinces who are in between the promise of government showing up and providing services and development on the one hand, and Taliban guys with guns on the other," Norland said. "If they do not believe that the government is really coming, they will go to the Taliban, and we are seeing that in some cases on a small scale. But it needs to be stopped. It's a dangerous trend."

Christopher Alexander, deputy head of the U.N. Assistance Mission in Afghanistan, worries about the Taliban resurgence fed by local discontent. "We do not think that this conflict can be resolved militarily, because that is the lesson of conflict and war," he said. "Political settlement must come into play at some point."

RAND analyst Jones said insurgencies are defeated only slowly, an average of 14 years in previous conflicts.

That's a long time for a desperate country.

Most of Afghanistan's 30 million people lead difficult lives. The poverty rate is estimated at 50 percent, unemployment at 40 percent. Clean water, electricity and advanced medical care are luxuries. Drought is a chronic problem. The average life expectancy is only 43 years.

The United States Agency for International Development has poured $4.3 billion into Afghanistan, refurbishing or building more than 500 schools and 500 health care clinics. Thousands of miles of road have been paved — a prerequisite for expansion of commerce and industry — and government offices are being built nationwide.

But Joanna Nathan, an analyst for the International Crisis Group which monitors war zones, said infrastructure alone isn't a path to victory.

"It is all very well handing out things and building buildings, but this will not make people love a corrupt local leader imposed on them," she said. "And if it is not accompanied by efforts to build institutions, then it is probably not sustainable."

An estimated 5 million to 6 million Afghan children now attend school — about a third of them girls — compared with 900,000 in 2000, said Leon Waskin, the director of USAID.

But attacks on schools are increasing, too, in a bid to undermine girls' education and the government's authority. Militants last year burned down or attacked 146 schools and already this year have attacked 158, the Education Ministry says.

President Hamid Karzai recently told the U.N. General Assembly there are 200,000 fewer children in school today than two years ago.

The Taliban's spread undermines Karzai's government, but the Taliban growth is based more on intimidation than true support, experts say. Many of its fighters are village men needing a paycheck, not loyalists, and Taliban fighters get sanctuary because of their guns.

A Taliban commander in southern Afghanistan, Mullah Hamidullah, told The Associated Press by phone from an undisclosed location: "First the U.S. alliance needs to leave the country, and when they do the Taliban will implement an Islamic government in all of Afghanistan."

Norland, the deputy U.S. ambassador, said the pace of Western support must accelerate. The U.S. walked away from Afghanistan in the 1990s, he said, and the Taliban took over. "I don't believe that America would want to be accused of doing the same thing twice."

And Abdullah Abdullah, Afghanistan's former foreign minister, said a pullout "would be a big, disastrous disappointment for the people of Afghanistan."
FISNIK ABRASHI and JASON STRAZIUSO