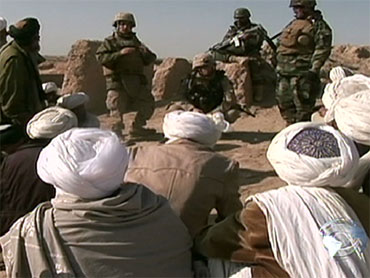 It is a famous axiom of military strategy that "war is the continuation of politics by other means." This GlobalPost special report looks at how economic aid in Afghanistan has become "war by other means." The four-part series reveals how the "civilian surge" is struggling to succeed and in some places actually creating instability and inadvertently benefiting the Taliban.

This Global Post look at the deep divisions in the U.S. campaign in Afghanistan between the civilian and military sides of the effort, a backdrop that formed the dramatic resignation of Gen. Stanley McChrystal and which may present the greatest challenge to Gen. David Petraeus as he assumes the top command and heads for Afghanistan. Here are highlights of the series:

More than $20 in U.S. aid is being used as a weapon of war, rather than a tool of development. This approach, according to aid experts, can dramatically backfire. In many cases, blurring the line between civilian and military aid prevents any real progress, and in some instances actually makes things worse. A tragic case in point is highlighted in our story: The Law of Unintended Consequences.

Billions of dollars spent over nine years to train and equip the Afghan security forces are badly bogged down, making the possibility of a timely U.S. withdrawal look ever more remote. Critics say the U.S. has sought to create the appearance that the situation is improving by training and in some cases arming local militias in the hopes that they will fight the insurgency. But some of these militias and their commanders have past links to insurgents and some counter-insurgency experts wonder if the U.S. may in effect be training forces that could ultimately side with the Taliban.

In setting up groups that are armed, empowered, but not firmly under government control, the United States is setting in motion forces that many analysts fear could lead to internal conflict or even civil war.

The United States is often insufficiently aware of the undercurrents in a certain area - tribal tensions, ethnic conflict, historical grievances. This at times causes the U.S. forces to make decisions that alienate the local population and aggravate an already tense situation.

Part One: Aid as a Weapon