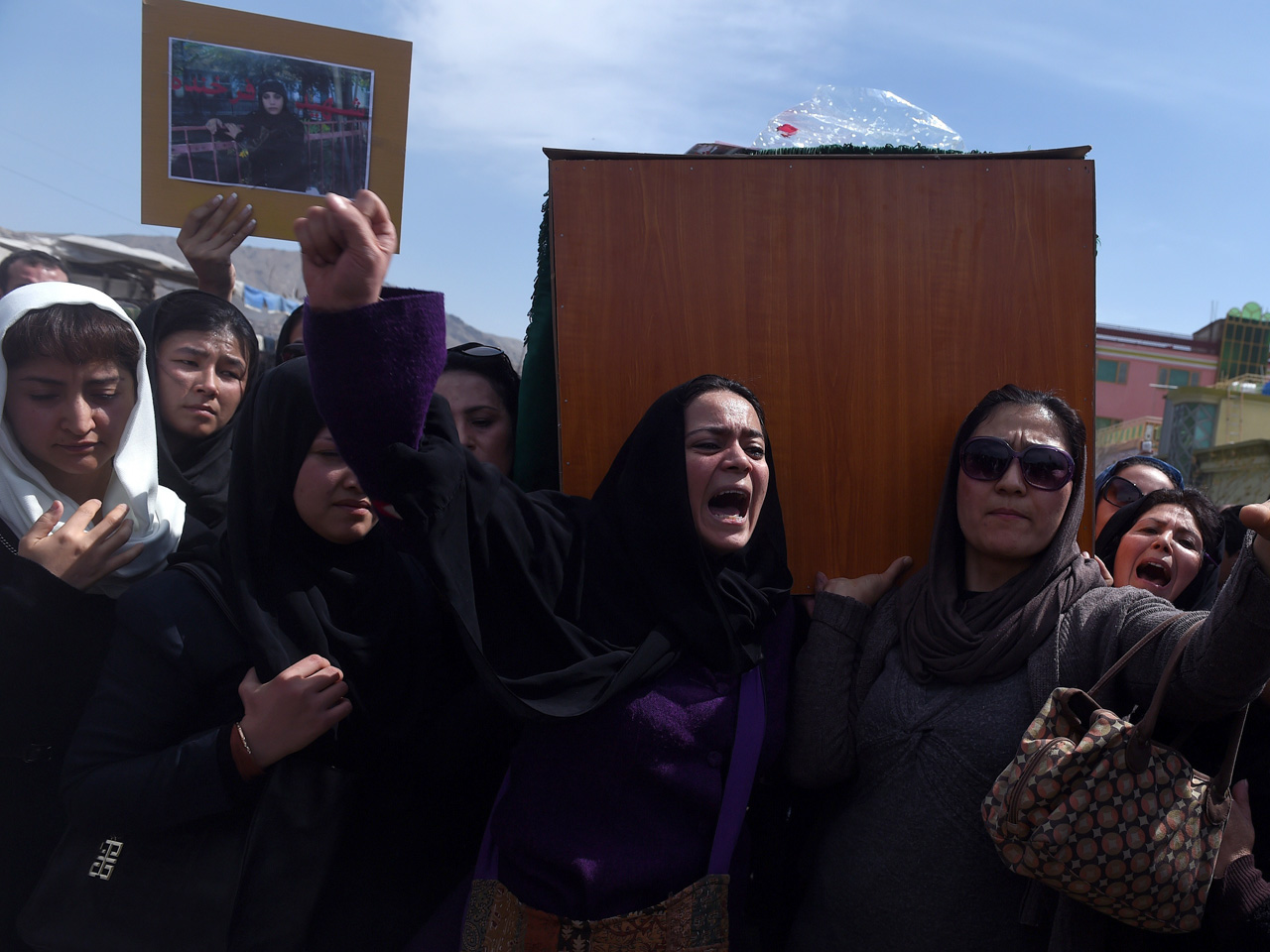 KABUL, Afghanistan - Afghan women's rights activists dressed head-to-toe in black broke with tradition Sunday to carry the coffin of a woman who was beaten to death by a mob in the capital Kabul over allegations she had burned a Quran.

The mob of men beat 27-year-old Farkhunda before throwing her body off a roof, running over it with a car, setting it on fire and throwing it into a river near a well-known mosque. According to an eyewitness, protesters were chanting anti-American and anti-democracy slogans while beating the woman.

The attack was apparently sparked by allegations that Farkhunda, who like many Afghans has just one name, had set fire to a Quran. But Afghanistan's most senior detective said no evidence had been found to support those claims.

Video of the assault taken with cellphones has circulated widely since the attack on Thursday. The killing has shocked many Afghans and led to renewed calls for justice and reform.

"In which religion or faith is it acceptable to burn a person to death? Today is a day of national mourning and we will not keep quiet."

President Ashraf Ghani, now in Washington on his first state visit to the United States since taking office in September, condemned the killing as a "heinous attack" and ordered an investigation.

Following allegations that police stood by and did nothing to stop the killing, Ghani told reporters before leaving for the U.S. that the incident revealed "a fundamental issue" - that security forces are too focused on the fight against the Taliban insurgency to concentrate on community policing.

The city's head of criminal investigation, Mohammad Farid Afzali, said the motive for the attack, which happened the previous night, was unknown.

Police had tried to disperse the crowd by shooting in the air, Afzali said, but had "reacted too late."

Many rights activists, however, said the killing cut to the core of how women are treated as second-class citizens in Afghan society.

Despite constitutional guarantees of equal rights and advances in access to health and education, for many women in Afghanistan little has changed since the 2001 U.S.-led invasion ended the Taliban's harsh rule. Girls are routinely married off as children, traded as chattels and then rarely permitted to leave their homes without a male relative.

Hundreds of people gathered at a graveyard Sunday in the middle-class suburb near Farkhunda's home. With the permission of her father, the women in black carried her coffin from an ambulance to an open-air prayer ground, and then to her grave, rituals that are usually attended only by men.

"She is a sister to you all, and it is your duty to bury her," Farkhunda's brother Najibullah, standing graveside, told the crowd.

Several politicians, officials and senior police officers addressed the funeral, which was broadcast live. Men formed a chain around the women pallbearers to offer protection and support.

The attack appeared to have grown out of a dispute between Farkhunda, a veiled woman who had just finished a degree in religious studies and was preparing to take a teaching post, and men who sold amulets at Shah-Do Shamshera shrine, where the killing happened.

She regarded the amulet sellers as parasites and told women not to waste their money on them, friends and family said. Her father, Mohammed Nadir, said the men responded by making false accusations that she had torched a Quran.

"Based on their lies, people decided Farkhunda was not a Muslim and beat her to death," he said. The Interior Ministry said it was providing extra protection for the family.

The head of the ministry's criminal investigation directorate, Gen. Mohammad Zahir, said 13 people had been arrested in connection with the killing, including two men who sold amulets. The Interior Ministry said 13 policemen had been suspended pending investigation.

Zahir said authorities were "unable to find any single iota of evidence to support claims that she had burned a Quran."

"She is completely innocent," he said.