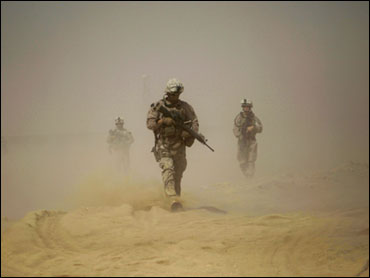 Gen. David Petraeus said there's no question that security in Afghanistan has deteriorated over the last two years. The general also told an audience Thursday that "there are still tough times ahead." He gave a speech at the Washington think-tank Center for a New American Security.

Petraeus leads U.S. Central Command, which spans from Egypt to Pakistan. The number of attacks last week in Afghanistan was not immediately available.

The general noted several challenges in Afghanistan he did not face in Iraq, such as the inability of U.S. troops to live among the local residents.

Meanwhile, NATO allies agree with the United States that progress must be shown in Afghanistan over the next year to 18 months, U.S. Defense Secretary Robert Gates said Thursday.

Gates said that after this summer's election in Afghanistan, he hopes "to see if we can shift the momentum."

Speaking to reporters traveling with him from the Netherlands to Belgium, Gates said: "If we can show we're making progress, if we're heading in the right direction, the American people and the Congress will sustain this effort. But if in a year or so it appears we are in a stalemate and we're taking even more casualties, that patience would wear thin pretty soon."

Gates said he tried to put allies' minds at ease about what some have called a creeping "Americanization" of the Afghan war effort, with U.S. commanders making the biggest decisions.

Gates said he wants a wide role for the military alliance in a rearranged hierarchy that will include his new team of hand-picked generals. Gen. Stanley McChrystal, Gates' choice as the top Afghanistan commander, is expected in Europe this week.

The U.S. has more forces fighting in Afghanistan than the rest of the NATO alliance combined, but American leaders say the war cannot be won without help from the alliance and other countries, including Afghanistan's neighbors.

Gates said Thursday he does not expect NATO allies such as the Netherlands to reconsider announced plans to withdraw their forces from Afghanistan over the next couple of years.

"Those political decisions have been made," Gates told reporters.

The first of some 21,000 additional U.S. forces are joining the fight in Afghanistan this spring and summer. President Barack Obama ordered the new troops to get an edge on a persistent Taliban insurgency that went almost unchallenged in some areas of the country where there were not enough U.S. and allied troops to hold ground.

In the Netherlands on Wednesday, Gates met with defense ministers from other nations with fighting forces in southern Afghanistan, seat of much of the heaviest fighting.

He visited Netherlands American Cemetery near Maastricht, site of the graves of thousands of American dead from World War II, and appealed for unity and resolve in the war in Afghanistan.

Gates said the allied nations fighting in Afghanistan share a purpose akin to the partnership that liberated Europe six decades ago. "Once again it requires great sacrifice from the United States, the Netherlands and the rest of the coalition trying to help a proud people rebuild their nation after decades of war," he said following a tour of the cemetery.