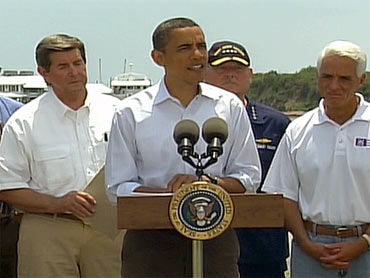 Two of three U.N. workers kidnapped in Afghanistan have called home to say they are OK, officials and relatives said Tuesday, and one hostage said she expected to be released soon.

A spokesman for the Afghan government said "progress has been made" toward ending the crisis. "I'm hopeful that we will see their safe release in the near future," said Jawed Ludin.

It was unclear, however, if officials would grant the demand of the Taliban splinter group threatening to kill the trio for a prisoner exchange, possibly involving inmates of the U.S. prison for terror suspects at Guantanamo Bay, Cuba.

The kidnapping fanned fear that Afghan insurgents had picked up the deadly tactics of their Iraqi counterparts, who have executed a string of Western hostages.

Afghan and U.N. officials leading efforts to secure their release have been tightlipped about negotiations. But there are signs a deal is possible.

Behgjet Pacolli, a businessman from Kosovo who says he is a relative of Hebibi, told The Associated Press that Hebibi made a satellite telephone call to a friend in Kosovo on Monday. The message was passed to her family, he said.

"She said she feels good and she will be soon with them in Kosovo, and I am happy for that," said Pacolli.

Pacolli said he had conveyed a message to the kidnappers via "influential people" — he met former President Burhanuddin Rabbani on Monday — and had received an answer.

"I expect tomorrow late a success," he said. He said no ransom was being offered.

In Manila, officials said Nayan made a brief call on Monday to the Department of Foreign Affairs, where he worked as a junior diplomat.

"He called and asked a duty officer of the department to tell his sister that he's OK," an official speaking on condition of anonymity said.

Philippine officials also said they were talking to possible intermediaries of the kidnappers.

Militants had set 2 p.m. as a deadline for Afghan and U.N. officials to arrange for the release of 26 prisoners, though a spokesman said Tuesday they would wait until evening.

"We're very hopeful they will accept our conditions," Syed Khaled told AP by telephone. "If not, the shura (council) will decide what to do next."

Jaish-al Muslimeen, or Army of Muslims, said Sunday that it had handed a list of 26 prisoners to government negotiators during secret talks in southern Afghanistan.

Sadir Momin, another spokesman for the militants, said 15 of the prisoners they want freed were arrested by American troops near the southern border town of Spin Boldak last month.

He said the other 11 were arrested at various times and could be in U.S. custody in Kandahar, the main U.S. base at Bagram, north of the capital, or Guantanamo Bay.

U.S. military officials in Afghanistan have declined to comment on whether it would release any prisoners.

The group has said it may ease its other demands, which include the withdrawal of the United Nations and British troops from Afghanistan.