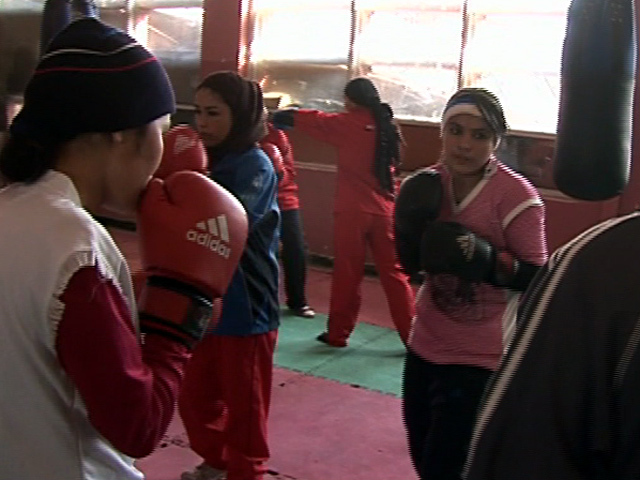 In Afghanistan during the 1990s, the Taliban stripped women of nearly all of their rights. They couldn't work outside the home, or even get an education.

But now, more than 10 years later, the Taliban is no longer in power, and two young women are trading in burkas for boxing gloves.

Shabnam Rahimi, 18, and her 17-year-old sister, Sadaf, are perhaps the ultimate underdogs, CBS News correspondent Mandy Clark noted on "The Early Show." They train in a gym with broken mirrors and few punching bags as they are preparing to try for for the fight of their lives -- the 2012 Olympic Games in London. To get there, the teens need to win tough qualification matches in China.

When asked what it would mean to make it to London, Shabnam Rahimi said, "Afghan girls are only known for suppression and poverty. If we go to the Olympics, we can bring some pride to Afghanistan and show the world we are not suppressed."

The female fighters have few resources, but don't count them out: These girls punch above their weight. They are just back from an international boxing competition where Shabnam Rahimi took home Afghanistan's first-ever gold in boxing. Sadaf got the silver.

Though women's boxing is increasing in popularity, few Afghans get to see the females in action. Watching women fight is considered taboo in their deeply conservative society.

The girls have even faced death threats. Under Taliban rule, women were banned from playing sports. Even the coach, Mohammed Sabir Sharifi, has been threatened for training them.

"It's a problem for the society but, you know, we are sportsmen, and sportsmen want peace and achievement for this country," Sabir Sharifi said.

The Kabul Olympic stadium is where they box, but it carries the country's dark history with it.

What's it like to train in a place where -- during Taliban rule -- women were executed?

"It is scary when you think of that. At night, I'm scared to walk here. It feels haunted, innocent blood was spilled here," Shabnam said.

Those old ghosts do remind them of their own death threats. But both girls say they would never stop boxing.

The sisters say, even if they don't get to the Olympics, they hope the world knows the true fighting spirit of Afghan women.