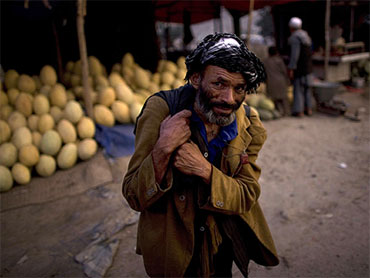 Even amid an effort by NATO forces to reduce civilian casualties in Afghanistan, the U.N. says the number of civilians killed or injured in the war there is going up.

But it says that's the fault of anti-government fighters, who were responsible for 72 percent of the civilian deaths in the first six months of the year.

Overall, the U.N. report says the number of civilians killed in the Afghan conflict rose by 25 percent during that time. One of the most startling statistics showed a 55 percent increase in deaths or injuries sustained by children in the country.

The report comes after a strong push by NATO forces to reduce civilian casualties and shows success in doing so on the part of the government-allied forces, but also serves as a reminder that the war is getting ever-more violent despite these efforts.

"The human cost of this conflict is unfortunately rising," Staffan De Mistura, the top U.N. envoy in Afghanistan, said about the report released in Kabul.

"We are worried. We are concerned. We are very concerned about the future because the human cost is being paid too heavily by civilians. This report is a wake-up call."

The U.N. said insurgents were responsible for 72 percent of the deaths - up from 58 percent last year.

As the U.N. held its briefing in Kabul, three civilians were killed when their car struck a roadside bomb just outside Ghazni city in eastern Afghanistan, according to Kazim Allayar, deputy governor of Ghazni province.

And an insurgent-planted bomb killed an Afghan civilian in the area around southern Kandahar city on Monday, according to NATO forces.

"If they want to be part of a future Afghanistan, they cannot do so over the bodies of so many civilians," de Mistura said of the insurgents.

De Mistura said the insurgent-caused jump in civilian deaths does not dissuade the U.N. from seeking a negotiated peace with the Taliban, but called on insurgent groups to consider whether they are not hurting their own long-term goals.

"One day, when unavoidably there will be a discussion about the future of the country, will you want to come to that table with thousands of Afghans, civilians, killed along the road?"

Even so, air attacks were the largest single cause of civilian deaths caused by pro-government forces - accounting for 31 percent.

Gen. Stanley McChrystal, the former NATO commander, introduced strict rules on air strikes and called on soldiers to assess the likelihood of civilian casualties before taking any action. His successor, Gen. David Petraeus, has continued on the same line.

"Every Afghan death diminishes our cause," Petraeus said in a statement. He also noted that even the increase in insurgent-caused deaths can hurt NATO's effort.

"We know the measure by which our mission will be judged is protecting the population from harm by either side. We will redouble our efforts to prevent insurgents from harming their neighbors," Petraeus said.

Though bombs continued to be the largest killer, there was a large jump in deaths from assassinations, particularly in the last few months.

There were about four assassinations or executions of civilians a week in the first six months of 2009. That jumped to about seven per week this year, and in May and June to 18 per week.

Adding to that grim tally was the murder of 10 humanitarian workers in the country's north during the weekend. The Christian charity involved said Monday it had no plans to leave Afghanistan despite the murders of 10 members of its medical aid team and repeated that the organization does not attempt to convert Muslims to Christianity.

The Taliban has called on its fighters to avoid civilian casualties, but the group pointedly excludes anyone allied with the government from this protection. So mayors, community elders taking foreign money for development projects and mullahs seen as supporting the government have all become targets.

Children have also increasingly become casualties of the war. The report says 176 children were killed and 389 others were wounded - up 55 percent over the same six-month period last year.

In Laghman province in the east, seven Afghan soldiers have died and 14 have been wounded in ongoing fighting with insurgents on the outskirts of the provincial capital of Mehtar, said Gen. Mohammad Zahir Azimi, a spokesman for the Defense Ministry. He confirmed reports that up to 20 Afghan soldiers have gone missing in the province and are in the hands of the Taliban. Thirteen militants have been killed and seven Afghan army vehicles have been burned in the clashes aimed at clearing an area between Kabul and Jalalabad, he said.