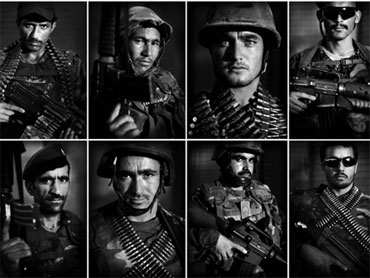 The Afghan soldiers look like they belong. They wear beards, carry Soviet-era rifles and stride confidently through fields of wheat, melons and okra. In one village, a young girl brings them a jug of milk to drink under the shade of a tree.

Officers in the U.S. Army routinely praise their Afghan partners: They know the culture, can relate to the villagers and understand regional politics.

But in southern Afghanistan, the focus of the U.S. war effort, nearly all the Afghan soldiers are foreigners too. Most don't even speak the local language. They have to communicate through interpreters hired for the Americans.

Despite ethnic quotas and recruiting drives, the Afghan army is still dominated by northern minorities who were oppressed by the Taliban. Nearly all Taliban are ethnic Pashtuns. Although many Pashtuns, the country's biggest ethnic community, are not connected to the Taliban, the rift between northerners and the southern Pashtuns runs deep.

Now this ethnically skewed army is pouring into southern Afghanistan as part of an operation to squeeze the Taliban out of strongholds here and win the loyalty of the main prize - the Afghan people.

When the international forces leave - whether it is next year or a decade from now - this mixed bag of soldiers will either rise to the challenge or allow the country to fall back into a collection of loosely affiliated territories ruled by tribally based militias.

"We can be here in the Pashtun area for 1,000 years, but they will never be our friends," said Lt. Gulagha Haksar, a 30-year-old Afghan soldier teamed up with U.S. troops here in the strategic Arghandab Valley. An ethnic Tajik, Gulagha remembers the killing sprees by the Taliban in his hometown in northeastern Takhar province.

"During the Taliban regime, whenever they arrested a Tajik, they beat him. They killed many people," Gulagha said.

Afghanistan has never been a strongly unified nation, but ethnic divisions intensified during the Soviet Union occupation of the 1980s, when resistance factions organized along ethnic lines. When these fighters unseated a Soviet-backed leader in 1992, they became embroiled in a civil war.

The Pashtun-dominated Taliban seized Kabul in 1996 and ruled from the capital until they were ousted five years later by the U.S.-led coalition and its Afghan allies in the Northern Alliance resistance group, made mostly of ethnic Tajiks, Uzbeks and Hazaras.

To give the military a national character, the Afghan army now has ethnic quotas for officers: 40-45 percent Pashtun, 30-35 percent Tajik, 10-12 percent Hazara and 8-10 percent Uzbek and other groups, according to Gen. Mohammad Zahir Azimi, a spokesman for the Defense Ministry.

That's roughly in line with the population. But the army does not track the actual ethnic makeup of the officer corps, so it's difficult to know if the quotas are really filled. There are no quotas for enlisted soldiers.

The Afghan army tries to ensure a mix of ethnic groups in each brigade of enlisted soldiers, but it is hard to find a brigade that northerners do not dominate. Of the nearly 40 soldiers based with the Americans at Combat Outpost Ware in the Arghandab Valley, only two are Pashtun. One of them is the cook.

It's hard to find an Afghan brigade that northerners do not dominate. Of the nearly 40 Afghan soldiers based with the Americans at Combat Outpost Ware in the Arghandab Valley, only two are Pashtun. One of them is the cook.

When the Afghans go on patrol in surrounding villages, they are treated as outsiders.

"When they see us, the old men say, 'They are the sons of the British,'" Gulagha said, explaining that the villagers equate both the Americans and the Afghan soldiers with the British attempt to colonize Afghanistan in the 1800s.

Even in Kandahar city, which is more diverse than the villages, there's a reticence to trust the northerner-dominated army.

"I want my Pashtun brothers to be in the Afghan army. If NATO leaves here, the outsiders will want to rule us and they will be heavily armed, said Ahmad Jan Agha, a 40-year-old owner of a stationary story in downtown Kandahar.

Nonetheless, many soldiers here display an uncommon patriotism in this fractured country where local warlords often hold more sway than the national government.

"I will stay in the army until our country is safe," said Asadullah Rasuli, a 20-year-old Uzbek from northern Jowzjan province.

"We are the same people. We are all from Afghanistan," said Khan Shirin Fakiri, a 30-year-old Tajik from northern Badakhshan province.

And the Afghan army does command more respect among the people of southern Afghanistan than the corrupt local police.

Yet there's still a long way to go.

When Afghan troops rolled into the southern town of Marjah this winter alongside American forces, many of the Afghans piled out of pickup trucks with windshields sporting pictures of the late Ahmad Shah Massoud - a civil war-era commander beloved by Tajiks but despised by many southern Pashtuns.

President Hamid Karzai has appealed to his fellow southern Pashtuns to join the army and the police. They haven't answered the call in great numbers.

Gulagha said his unit initially had more Pashtuns, but they weren't trustworthy and deserted.

"We sent them to the Kandahar city bank to get their salaries. They took the money, left their weapons and drove off," he said.

Five soldiers deserted, but Gulagha focuses on the fact that two of them were Pashtun.

Mirza Mirzadin, a lanky 26-year-old from the eastern city of Jalalabad, is one of the two Pashtuns left. He said he doesn't feel any ethnic divide with his fellow soldiers.

"We are like brothers when we are out on missions together," he said.

But Gulagha, his commanding officer, sees things differently. He said the Pashtuns are OK because they are the minority in the unit.

"We don't trust them completely. But when we go outside the wire, we don't worry about it because there are more of us than them so we can keep them in line."

Still, Gulagha and Mirzadin are friends. They pray together on a mat in a tent that also serves as their chow hall. They joke together and watch out for each other on patrols.

Gulagha said he wants to feel like the Pashtuns with whom he serves are trustworthy. But he's suspicious that any Pashtun might have ties to the Taliban.