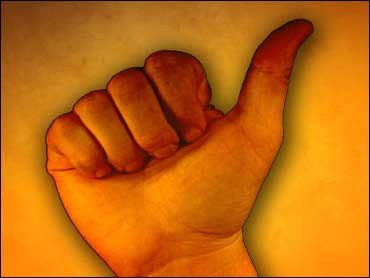 Thumbsucker, an indie movie that generated a lot of buzz at this year's Sundance Film Festival, is the story of a boy trying to kick his thumb-sucking habit at age 17. Walter Kirn, upon whose novel the film is based, has admitted that the story is to some extent autobiographical.

He was a teenaged thumb sucker, but now, in his 40s, he no longer indulges habitually.

That's not the case for Harvey, who at age 55 still enjoys sucking his thumb. Harvey, a retail store owner in Long Island, N.Y., prefers not to disclose his last name for fear of ridicule.

Adult thumb suckers are not big babies, Harvey says. "There's a lot of them who are quite successful, with adult responsibilities," he tells WebMD.

But people are likely to see adults who suck their thumbs as immature. After all, most of us abandon the practice by age 8, according to the American Academy of Pediatrics.

"There is a sense of embarrassment and humiliation from it," says Alan Manevitz, MD, a specialist in family psychiatry at Weill Cornell Medical College and New York-Presbyterian Hospital in New York City.

"The question is, why do we feel so strongly about this? I think people react to this similarly to the way they feel when they see public breastfeeding, or when they hear that parents sleep with the kids beyond a certain age," he tells WebMD.

Some adults who suck their thumbs aren't afraid to flaunt it, like Lindsey Boyes, 22, of Marietta, Ga. "For a while there, around middle school and high school, it was kind of embarrassing," he tells WebMD.

Even then, his friends came to accept it, and he has since gotten over any shame. It hasn't interfered with his love life, either. His wife, he says, "actually finds it quite cute."

Both Harvey and Boyes say they don't want to quit.

"It's just a very comforting and calm feeling," Boyes says. "Nothing else I've ever done or experienced can give me that same feeling."

"Most people who describe the sucking feel that it soothes them, calms them, gives them comfort, focuses them," Manevitz says.

What's The Harm In Thumb Sucking?

Manevitz says there is nothing inherently pathological about thumb sucking. An adult or adolescent thumb sucker is not necessarily any more deranged than a pen chewer or a nail biter.

"If somebody bites their nails, we may say that's a bad habit, or even that it's disgusting, but we don't see it as psychologically so damaging," he says.

But it can be a problem, he says, "if it's used in the way any habit is used to isolate somebody or restrict somebody from intimacy and other connections."

Everyone, except perhaps some Zen masters, clings to one thing or another for comfort. Thumb sucking is arguably a healthier means of seeking solace than polishing off a quart of ice cream or a pack of cigarettes.

Thumb sucking causes dental problems for some, but not all those who do it for a long time. The teeth may move and flare out where the thumb is habitually placed, but whether or not that happens depends on how hard and how often the person sucks.
"I had an overbite for a long time, and I had braces to correct it," Boyes says. The overbite was a direct result of thumb sucking, and it came back after his braces came off.

Stars such as Madonna, Rachel Williams, and Rosanna Arquette have toyed with the sexual implications of thumb sucking by posing for photos with their thumbs provocatively in their mouths.

Thumb suckers who carry the habit into adulthood may not be inclined to give it up, or else they would have long ago, at their parents' urging. But social pressure may eventually get to them, in which case Manevitz says cognitive behavioral therapy, a form of psychotherapy used to help people change all sorts of behaviors, is the best treatment.

"As with any habit, the person has to make a commitment that they do want to stop," Manevitz says.

Once committed to stopping, "the No. 1 best thing is to substitute a habit with a habit," he says. A thumb sucker may try sucking on something else, like a lollipop.

Anti-anxiety drugs may be helpful also for people who suck their thumbs primarily when they're anxious.

Thumb Suckers Among Us

No one knows exactly how many people continue to suck their thumbs into adulthood. The vast majority of research focuses on children's thumb sucking.

Through a survey on his web site, thumbsuckingadults.com, Harvey has learned a lot about visitors' habits. "What it doesn't portray is what percentage of the population actually indulges," he says.

He suspects it's not as rare as one might think.

When his stepdaughter, age 19 — not surprisingly a thumb sucker herself — went off to college recently, Harvey predicted that she would find three other thumb suckers living in her dorm. "It turned out that she had three on her floor."