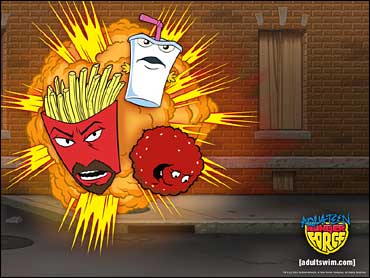 Midway Games Inc. announced that it has signed a multi-territory agreement with Cartoon Network, licensed by Warner Bros. Interactive Entertainment, to publish video games based on five of the network's Adult Swim programs: Aqua Teen Hunger Force, The Brak Show, Harvey Birdman, Attorney At Law, Sealab 2021, and Space Ghost Coast to Coast. Under the terms of the agreement, Midway has the rights to develop and publish games for the console, handheld and PC platforms. The first Adult Swim product is scheduled to ship in late 2006.

Adult Swim is Cartoon Network's late-night programming block of cartoons that appeal to a grown-up sense of humor and adult sensibilities such as superhero lawyers, talking food items and cranky talk show hosts.

"Cartoon Network is known for creating programming that is cutting-edge in its presentation and content, and thus perfectly suited for video games," said David F. Zucker, Midway president and chief executive officer. "The built-in fan base and popularity of Adult Swim affords us a critical stepping stone towards success."

"Adult Swim is a phenomenon with young adult viewers who identify with the edgy, irreverent tone of the shows and the block," said John Friend, senior vice president, Cartoon Network Enterprises. "Clearly, lots of Adult Swim fans are avid gamers, and we look forward to working with Midway to make games the fans will love."

Young adults are flocking to Cartoon Network in record numbers, thanks primarily to Adult Swim, which in 2004 set new network records for total delivery of adults (18-34 and adults 18-49). Research indicates that Cartoon Network is watched by more adults (18-34) than E! Entertainment, USA, Discovery, TV Land, CNBC, A&E and VH1, among others.

The Adult Swim properties include: