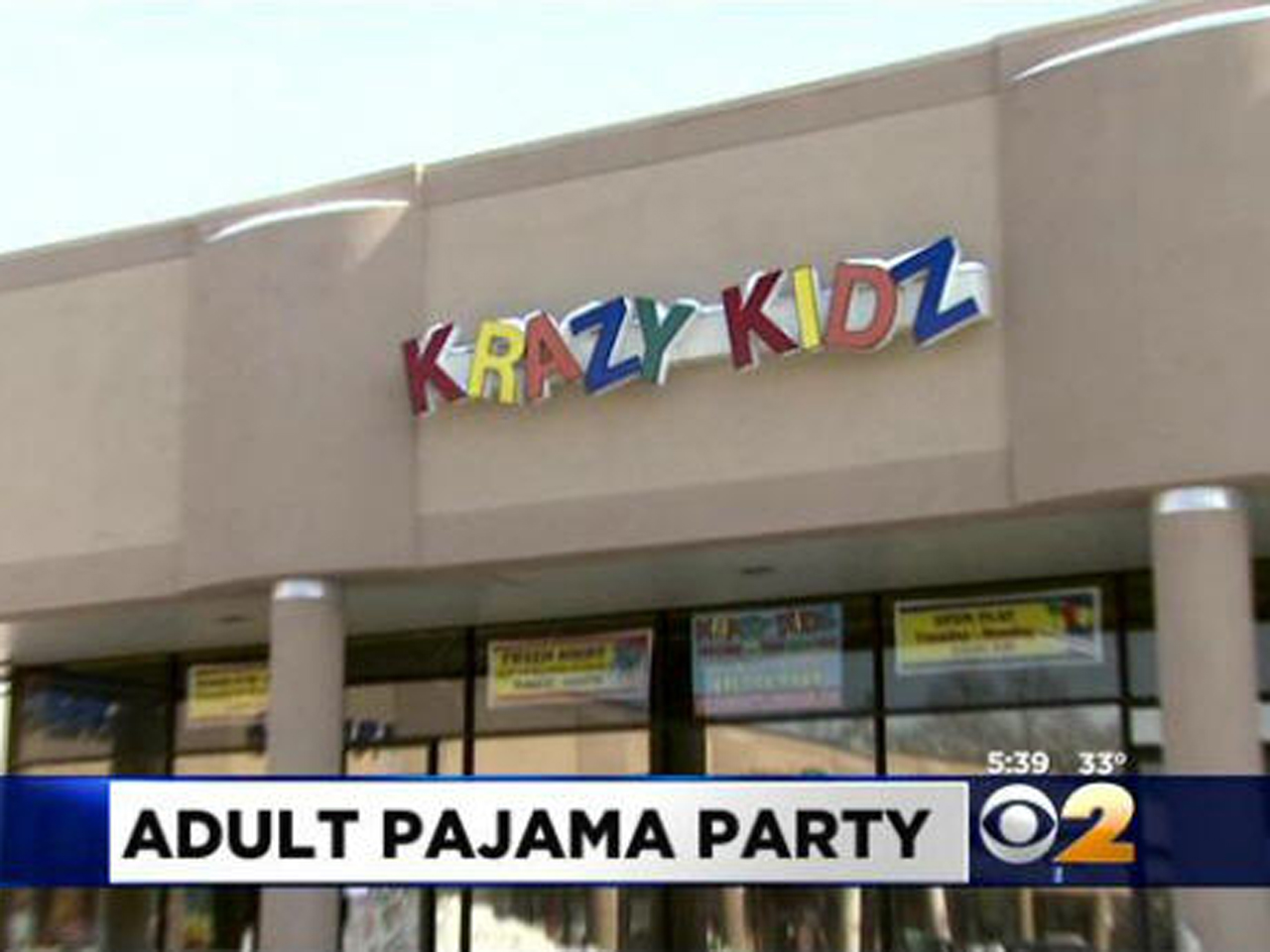 Krazy Kidz, in Medford, N.Y., has been under fire ever since it hosted an event this past Saturday night promoted via Meetup.com, and titled, “Jungle Gym & Pajama All-Night Dance Party: For Grown Ups Who Won’t Grow Up,” reports CBS New York.

“That’s not how you generate extra money. It’s a kids’ place,” Samantha Gray said. “And they have an adult nude sleepover?”

Gray was supposed to drop off students for an after-school function at the popular children’s party center, but she found it had been abruptly closed for a “thorough sanitizing,” as stated by the owners of Krazy Kidz.

Krazy Kidz has been in the public crosshairs since local parents got wind of fliers and invitations distributed by the private group that rented the facility out for the adult party, which included body painting, Jello wrestling, pillow fights and a Twister contest.

But parents who take their children to the facility did not believe the adult party amounted to “good, clean, wholesome fun.”

“Most of my friends and everybody who’s talking about it will refuse to go there now,” said parent Elissa Trusnovec of Yaphank.

The invitation said there would be “ABSOLUTELY NO CAMERAS ALLOWED,” although some semi-professional photographers and a photo booth would be set up.

And as the postings went viral, they elicited hundreds of comments.

“Usually I would say this place is great. However, after seeing the pictures from a private adult party the other night,” one woman wrote on Facebook. “I will never spend my money to have my children play where ‘adults partied naked and god only knows what else.’ I hope the money was worth it. Because you will lose a lot more because of this.”

“GROSS!” another wrote. “There has to be some sort of police involvement over this!”

Melissa Webster of Holbrook also commented, and told CBS New York such a party simply was not appropriate at a children’s facility.

“I said online that, to each his own. You can do what you like to do – but not at a children’s facility,” she said. “I actually have concerns for sanitary.”

The owners did not immediately respond to requests for comment from CBS New York, but Krazy Kidz did address the party on its own Facebook page.

Krazy Kidz first said “the event was no different (than) an ordinary Halloween party that you would hold at your home,” and emphasized that the venue was thoroughly cleaned afterward.

“Please understand that our staff was not involved in this event and they look forward to continuing to serve the public,” Krazy Kidz added on Facebook. “In addition, our private party facility rental policy is currently under review to prevent any such misunderstandings from occurring in the future.”

Krazy Kidz said it would remain closed for additional cleaning Tuesday and would reopen Wednesday.

“The staff at Krazy Kidz continues to apologize for the obvious lack of judgment that has resulted in everyone’s concerns and comments,” the venue said on Facebook.

Parents’ opinions varied Tuesday on whether further consequences were warranted for Krazy Kidz.

“It’s privately owned, so I don’t think you can tell them how to use their facility. (But) I don’t agree with it,” said Sharon D’Andrea of Sayville.

“They should be definitely closed down and cited for that – absolutely,” added Julie Edwards of Medford.

The Town of Brookhaven received complaints and said it is investigating. As of Tuesday, it appeared no local codes were broken.