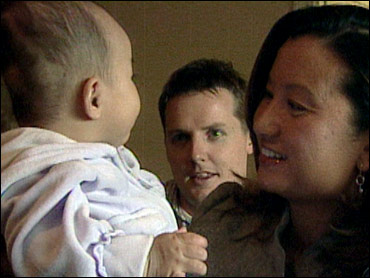 The baby's Vietnamese name means Gentle Water. She was just weeks old when she was abandoned - left in the garden of an orphanage near Hanoi.

"How could you take this beautiful little girl and just send her somewhere?" Bodenhamer said.

But 33 years ago, exactly the same thing happened to Hart. At six months old, she was abandoned in a rice field - an orphan of the Vietnam War.

"I was completely malnourished - I was probably half of her size," Hart said. "I had boils everywhere."

The nuns at the orphanage thought she was too sick and weak to survive. But in Colorado there was a family that wanted her.

"That's my original Vietnamese passport that I came over with," she said, showing the old document. "My only belonging."

She was nursed back to health, grew up and thrived. But when she thought about having her own family, she knew where it had to start.

"We just felt like that's one of the greatest gifts you can give anyone," she said. "The gift of opportunity and love."

To meet her new daughter, Hart returned to the land she left when she was just six months old.

"You know, I kind of fought back some tears when I - we - first landed, just because I'd never been there," she said.

She wondered, of course, about her own mother who gave her up. And about Lola's mother who put her baby in a little cartoon dress and left her at the orphanage gate.

"It must have been really difficult, and I feel really bad for her," Hart said.

She did it, Tallia is certain, to give her daughter a better life. And no mother could understand that better than Tallia does.