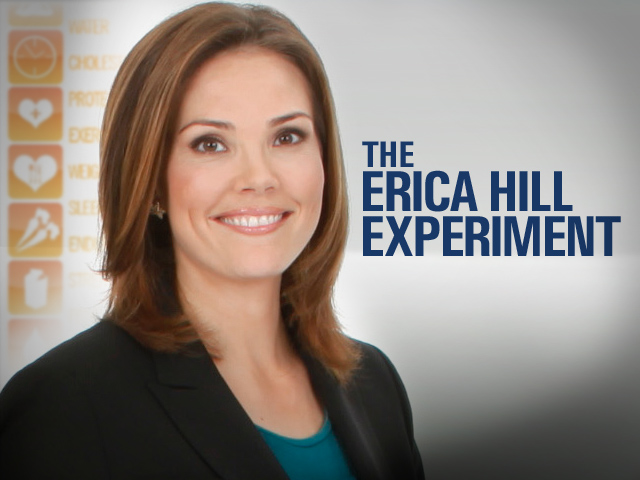 Six weeks ago, "Early Show" co-anchor Erica Hill attempted to start following all the advice you hear about getting a healthier and more balanced lifestyle.

"As a working mom, getting the right amount of diet and exercise into my daily routine was often a challenge," Hill says.

Enter "The Erica Hill Experiment" -- six-weeks, chronicled on the show and on CBSNews.com during which Erica tried to incorporate healthier habits into her life, with the help of advice from three experts - advice viewers could use, as well.

And, says Hill, "Looking back, I'd have to say it might be worth your while."

The experts measured and monitored Hill's fitness level and nutrition, then charted a new course toward better health.

"Following the daily recommended guidelines for a healthier lifestyle over the last six weeks has been a lot like running a marathon," Hill says, " one that's required a great deal of endurance to complete."

"My goals were to exercise 30 minutes a day, sleep eight hours a night, and adhere to a diet set to the government's food pyramid.

"I still like coffee," Hill points out. "I'm just not as married to it as I used to be."

Hill and Baten went shopping for better healthier foods, such as green veggies, in the grocery aisle, impressing what Hill lovingly called "my discerning family" at the dinner table.

"This keener eye on diet also led to more sustained energy throughout the day and more restful sleep at night," Hill says.

"Her energy is more sustained throughout the day as a direct result of her making improvements in her diet," Baten notes.

"And," says Hill, "I needed plenty of energy to endure six weeks of working out" with Wilson!

"In the beginning," Wilson recalls, "she was a little sluggish and missing some workouts. She got it back by week three. I made her work a bit longer a little bit harder."

"One of the things I loved," says Hill, "is that we constantly mixed it up. ... But meeting up three days a week wasn't easy. And I wasn't always on time. Clearly scheduling was one of the toughest parts of this experiment."

And now, Hill concedes, "I am relieved that some of the scheduling madness will be gone. But I'm looking forward to continuing this experiment on my own.

"Since hitting the gym every day was a challenge, Sidney designed a routine to better blend fitness with my life, so I could work out in my office or more than 3,000 miles from home -- which I did while reporting from London for the early show this week."

"We had great training toward reaching her goals, and she reached them," Wilson says.

"For this experiment to be a success," Hill says, she "needed measurable results."

So she re-took the fitness exam from six weeks ago.

"I was so nervous I would walk in and not lose any weight; that I wouldn't see any changes in my body composition; or do any better in any of these exercises," Hill admits."If I threw in one extra workout per week, if I was better at doing my sit-ups two more nights a week, the difference I could make is huge."

Suddenly, Hill says, six weeks "didn't seem like enough time to reach my own high expectations, but ... I made every effort to live up to them.

"I have to admit that ending this six week experiment is a little bittersweet. The workouts were often difficult, but the rewards were actually pretty incredible."

Hill sat down Friday with Ashton and Baten: