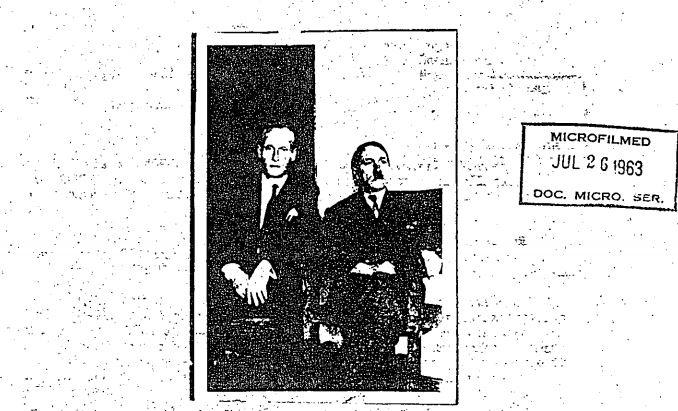 The CIA was aware of and interested in rumors that Nazi leader Adolf Hitler escaped Germany at the end of the World War II and fled to South America, documents released this week by the U.S. foreign intelligence agency show.

It is considered fact that Hitler took his own life in a bunker in April 1945 as Allied forces closed in, but a CIA operative identified only by the moniker "CIMELODY-3" reported back to Washington in 1955 that a trusted contact had informed him Hitler was alive and well, living among other Nazi expatriates in Colombia who still referred to him as "der Furher."

The operative wrote several memoranda to CIA headquarters, which were released as part of the U.S. government's disclosure of documents relating to the assassination of President John F. Kennedy.

The first of the documents relevant to the Nazi leader is an internal memo, classified as "Secret" when it was sent on Oct. 3, 1955. It was from the CIA's Caracas station in Venezuela, and it said CIMELODY-3 had been shown a photograph by his contact in Colombia that purportedly showed another escaped Nazi officer standing next to Hitler.

"On 29 September 1955, the photo was shown to CIMELODY-3 for purposes of getting his reaction to the possible veracity of this fantastic story. Obviously, CIMELODY-3 was not in any position to make any comments. Nonetheless, he borrowed the photograph long enough so that this Station could take any action deemed advisable," the memo reads.

The grainy black and white photo undoubtedly shows a man who resembles the leader of Germany's Third Reich, but the CIA's skepticism is evident in the remarks.

From the documents, it appears CIMELODY-3 never met the actual source of the information, a former Nazi SS trooper identified by the CIA as Phillip Citroen.

Citroen allegedly told the CIA agent's source he met "Hitler" in Tunja, Colombia, in 1954, a place he described as "overly populated with former German Nazis."

"According to CITROEN, the Germans residing in Tunja follow this alleged Adolf HITLER with an idolatry of the Nazi past, addressing him as 'der Fuhrer' and affording him the Nazi salute and storm-trooper adulation," according to a second memo sent from the CIA's field office in Maracaibo back to Washington later in Oct. 1955.

The Miami Herald reports that a letter sent the following month, also released with the JFK documents, shows CIA senior officials in Washington had lost interest in the matter.

"It is felt that enormous efforts (spent trying to confirm the rumors) could be expanded on this matter with remote possibilities of establishing anything concrete," the Herald quoted the letter as saying. "Therefore, we suggest that this matter be dropped."

According to the Herald, that was the last mention of the "Hitler" in Colombia by the CIA -- at least in the documents released to the public some 60 years later.