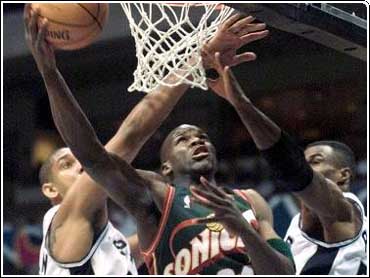 The Spurs' defense put the offense in position to win.

"The best part of the game is that both teams battled it out," Spurs coach Gregg Popovich said. "You had two good teams going against each other. Late in the game when we were down, a lot of teams would have packed it in, but we didn't. The resolve we showed was great."

After Robinson missed two free throws with 9.7 seconds left, Seattle had a chance to send the game into overtime, but Gary Payton missed an off-balance jumper as time expired.

"It came down to the last minute," said Tim Duncan, who had 22 points and 10 rebounds for San Antonio. "We struggled a little bit during the fourth quarter, but we found a way to get it done."

Seattle trailed 61-56 at the start of the fourth quarter, then rallied to take a 73-71 lead with 4:38 to play on consecutive 3-pointers by Brent Barry.

San Antonio tied it at 77 on two baskets by Robinson and a bank shot by Duncan with 55.7 seconds remaining. Seattle went scoreless for the final 3:20.

"This was one of those nights we lost the game, but I was proud of our effort," Seattle coach Paul Westphal said. "We put ourselves in a position to win this game, we just couldn't make baskets near the end of the game."

Leading 51-47 early in the third quarter, San Antonio went on a 7-0 run. The Sonics were held to 11 third quarter points.