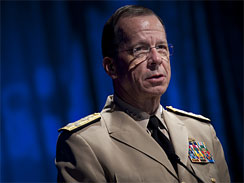 Wednesday night Adm. Mike Mullen, the Chairman of the Joint Chiefs of Staff, gave a speech to the Asia Society in which he said, "I have moved from being curious to being genuinely concerned" about China's military buildup.

For years there has been an argument among China hands about what Beijing was up to. China's stated goal is territorial defense but it seemed to be investing in equipment such as long range missiles and even an aircraft carrier which traditionally are used to project power overseas.

Why would China want a military that could operate thousands of miles away from the Chinese mainland? For one, China has never given up the quest to retake Taiwan, which it can never do as long as the United States is pledged to come to Taiwan's defense. But if China can launch long range missiles against the U.S. Navy it would have the capability to at least interfere with America's defense of Taiwan.

And then there is the competition for energy. China's burgeoning economy needs all the fuel it can get and there may come a day when the U.S. and Chinese are competing for the same pool of oil.

There isn't much cause for concern. The U.S. has capabilities - 11 aircraft carriers, for instance - which the Chinese are only now thinking of.