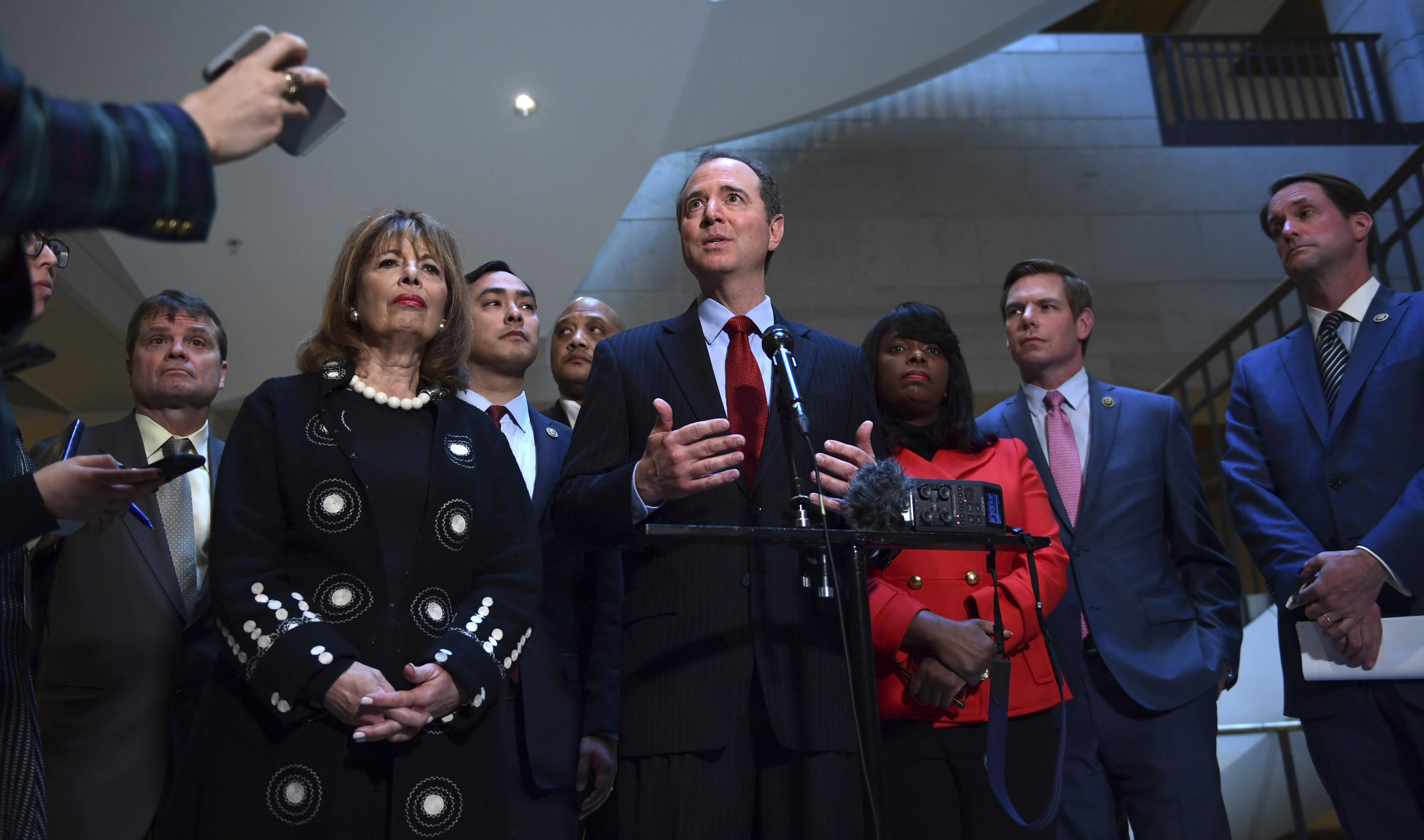 A day after House Intelligence Committee Republicans unilaterally declared an end to the committee's year-long investigation into Russia's interference in the 2016 presidential election, Democrats came out in force to criticize the decision, the majority's conclusions, and the 150-page draft report that Democrats were summarily presented with on Tuesday morning.

"We had a chance to do a cursory review of the majority's draft report," said Ranking Member Adam Schiff, D-California, "and, sadly, it is little more than another Nunes memo in long form."

It was a biting reference to a months-long controversy, principally stoked by Republicans, that culminated in the public release of dueling partisan memos on alleged surveillance abuses. The episode marked a low point in the committee's once-bipartisan operation and has become, it would appear, emblematic of its process for releasing future products.

Democrats will now write their own, separate report and, as a consequence, Schiff said, put readers in the "unenviable position" of deciding which one they chose to believe.

"That is an outcome that we sought from the very beginning to avoid," he said.

Schiff also made clear the Democrats' report would dispute at least one of the Republicans' central conclusions.

"I can certainly say with confidence that there is significant evidence of collusion between the campaign and Russia. What I cannot say – because I don't know what Bob Mueller knows – is whether that evidence rises to the level of proof beyond a reasonable doubt of conspiracy to violate U.S. election laws," Schiff said.

In a nearly 30-minute press availability on Tuesday – in which he appeared flanked by fellow Democrats, who also spoke in turn – Schiff said the majority's report characterized events in a misleading way and "tells a story that could not have been better written if it was written in the White House itself."

"It is not a serious work. But then it wasn't designed to be," Schiff said.

Rep. Mike Conaway, R-Texas, who has been leading the Russia probe since committee Chairman Devin Nunes stepped aside amid an ethics investigation last April, announced on Monday -- when Congress was not in session and many members were away -- that the majority had concluded the interview phase of its investigation. He said the committee had reviewed tens of thousands of documents, and found no evidence of collusion, conspiracy or coordination between the Trump campaign and Russia.

Hours later President Trump weighed in with an all-caps tweet reciting the majority's conclusions. On Tuesday, he told reporters he was "very, very happy" with the committee's "decision." "It was a powerful decision that left no doubt," the president said.

Separately from their conclusion that collusion did not occur, some of the committee's Republicans have made seemingly contradictory statements about another key finding in their report – namely, that it did not support American intelligence agencies' assessment, made with high confidence in January 2017, that President Vladimir Putin and the Russian government "developed a clear preference for President-elect Trump," and sought to help his election chances.

Both Rep. Trey Gowdy, R-South Carolina, and Rep. Tom Rooney, R-Florida, said in subsequent statements or interviews that the intelligence community's assessment was correct. Conaway, in keeping with a one-page summary of the majority's report that was released Monday, said it was a "glass half full, glass half empty" scenario that left open to interpretation whether Russian interference that hurt Hillary Clinton was equivalent to helping Donald Trump.

"The issue we have is with the analytic tradecraft," Conaway said on Tuesday, saying that while "98 percent" of the analysis was "just fine," there were "standards that CIA analysts and other analysts hold themselves to and we believe that on this one narrow little piece of the deal that the standards were not upheld."

Pressed on how those intelligence analysts might have fallen short, Conaway replied, "I've got two people that worked that program for well over 1,000 hours-plus, so I'll go with the guys I pay."

The Office of the Director of National Intelligence said on Monday that it stood by the conclusions of its January assessment and would review the HPSCI report findings. The CIA referred inquiries about the matter to ODNI.

Democrats took no issue with the intelligence community's assessment or its underlying tradecraft. They did release a 21-page status update with four appendices outlining investigative avenues they claim they have been prevented from pursuing by the Republican majority.

Among the 30 key witnesses listed – some of whom, the document says, have offered to cooperate – are current or former Trump campaign officials like Reince Priebus, Stephen Miller and Sean Spicer.  There are witnesses to pivotal moments, like Russian lawyer Natalia Veselnitskaya, who attended the June 2016 Trump Tower meeting, and businessman George Nader, who was reportedly present at the January 2017 Seychelles meeting. There are also individuals associated with the National Rifle Association, who Democrats said might have knowledge of outreach to the Trump campaign from the Kremlin.

The update renews Democrats' previous calls to compel testimony from witnesses who have already appeared but declined to provide answers beyond a certain scope of questioning, including Donald Trump, Jr., Jared Kushner, Attorney General Jeff Sessions, and Hope Hicks. There are also dozens of entities, companies and documents listed, ranging from Deutsche Bank to Kushner Companies to internet companies like Google, Facebook, Snapchat, Tumblr and Twitter.

Schiff said those "missing pieces" meant the minority's report would be necessarily incomplete, though Democrats would continue their work on the investigation, he said, to the extent they could.

"We are prevented from finding out," he said, "but I can only hope that Mueller operates under no such restriction, and that over time, if not at the present, we will get the answers."