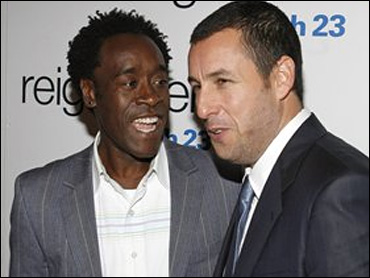 David Letterman wasn't camera-ready Tuesday, but "Late Show with David Letterman" went on nonetheless, thanks to some fancy footwork.

A CBS spokesperson tells TheShowbuzz.com that Letterman had to go home sick with a stomach virus, but he was able to find a last minute fill-in to handle his "Late Show" hosting duties: Adam Sandler.

Sandler was already scheduled to appear on the show as a guest, along with actor Don Cheadle, to promote their new film "Reign Over Me," a drama about a man who reconnects with a college roommate after losing his whole family in the Sept. 11 attacks.

Cheadle, who was nominated for an Oscar for 2004's "Hotel Rwanda," remained on the guest roster for the night, providing a leg up for Sandler, whose other guests were auto racing driver Danica Patrick, roots rock singer/songwriter Lucinda Williams, and comedian Todd Barry.

2Sandler opened up with a monologue saying, "Welcome to the show, this is very big. I know you're thinking, 'I had no idea Dave's son got so big... and Jewish!'"

"This is bizarre, but it's cool," said Sandler, as he settled into the big chair at Letterman's desk.

The 40-year-old comedian and actor also spoke about his ten-month-old daughter during his banter back and forth with musical director Paul Schaeffer.

Sandler brought out his bulldog Matzoh Ball as a "practice guest," asking questions of the inscrutable pooch.

He brought one other thing with him – a touch of humility - as he tackled the job so many comedians crave.

At one point during his interview with Cheadle, Sandler proclaimed: "I really suck at this!" and switched seats.

3Guest hosts have filled in for Letterman in the past, following his emergency heart surgery in 2000 and during a four-week-long absence in 2003 due to a severe case of shingles.

This is believed to be the first time the "Late Show" host has shown up for work and been unable to do the show.

The shows airing Thursday and Friday are both repeats due to delays by NCAA basketball tournament games.

Letterman is expected to be back on the job on Monday.