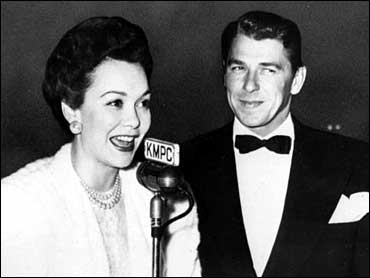 Wyman died at her Palm Springs home, said Richard Adney of Forest Lawn Memorial Park and Mortuary in Cathedral City. No other details were immediately available.

Wyman's film career spanned from the 1930s, including "Gold Diggers of 1937," to 1969's "How to Commit Marriage," co-starring Bob Hope and Jackie Gleason. From 1981 to 1990 she played Angela Channing, a Napa Valley winery owner who maintained her power with a steely will on "Falcon Crest."

Her marriage in 1940 to fellow Warner Bros. contract player Reagan was celebrated in the fan magazines as one of Hollywood's ideal unions. While he was in uniform during World War II, her career ascended, signaled by her 1946 Oscar nomination for "The Yearling."

The couple divorced in 1948, the year she won the Oscar for "Johnny Belinda." Reagan reportedly cracked to a friend: "Maybe I should name Johnny Belinda as co-respondent."

After Reagan became governor of California and then president of the United States, Wyman kept a decorous silence about her ex-husband, who had married actress Nancy Davis. In a 1968 newspaper interview, Wyman explained the reason:

"It's not because I'm bitter or because I don't agree with him politically. I've always been a registered Republican. But it's bad taste to talk about ex-husbands and ex-wives, that's all. Also, I don't know a damn thing about politics."

A few days after Reagan died on June 5, 2004, Wyman broke her silence, saying: "America has lost a great president and a great, kind and gentle man."