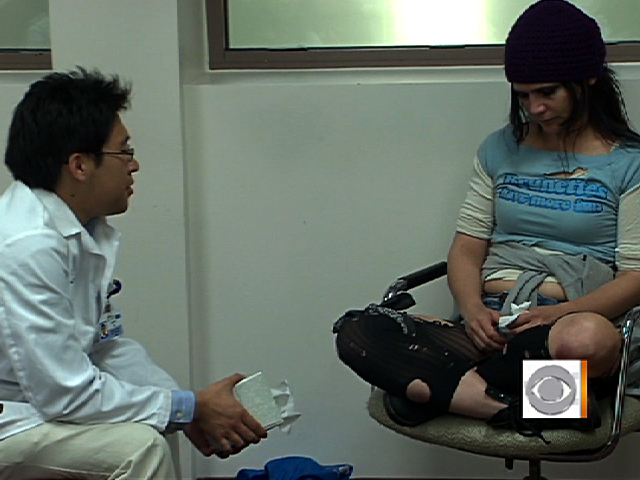 Out-of-work actors do all sorts of jobs to pay the bills. Now you can even find some of them in hospitals, auditioning for parts that teach future doctors some valuable lessons.

Stage and screen actor Neal Mayer has credits that run from "One Flew Over the Cuckoo's Nest" to CBS' "Blue Bloods." But these days, as CBS News correspondent Bill Whitaker reports, his stage is a "mock" medical exam room at New York's Weill Cornell Medical College, equipped with cameras and microphones.

Earning $25 an hour, Neal is playing a patient, and his co-star is real-life, second-year medical student Jessica Rubin.

At the medical college, it's the student's performance that's being evaluated by a very small audience -- an instructor behind a two-way mirror. It's a way to help inexperienced students take what they learn in the classroom and apply it in an actual clinical setting.

Yoon Kang, director of the Margaret and Ian Smith Clinical Skills Center, explained the method helps students "get an opportunity to practice, and potentially, frankly, to make a mistake without any harm coming to a patient."

In the U.S., 126 medical schools report using these so-called "standardized patient" programs. Each one employs a variety of actors spending the day portraying patients with the same symptoms.

On the day Whitaker stopped by the school, Neal was portraying a patient with a neurological problem. But, on other days, the script could call for something else.

Neal said, "I have had meningitis as a standardized patient. I have had gout. I've had a whole bunch of different ailments over the years."

But sometimes, these schools call for troublesome patients, a practice in patience for students. At the David Geffen School of Medicine at UCLA, medical students encounter "Twinkie," a street-wise 17-year-old.

When asked a question about her sexual history, one actor replied in character to the medical student, "I don't know. How many have you had?"

Tara Taylor, an actress who portrayed the "Twinkie" character said of the role, "It's kind of mean in a way. We're sort of trained to torture them. But that's how they learn in this particular case."

"I interviewed Twinkie a few years ago. And she seemed very extreme at the time," Diaz said. "But I actually had a patient who was very similar to Twinkie in one of my clinics. I feel like having that interview sort of under my belt in a lower stress environment really helped me interact with that patient."

The students have to give "Twinkie" a devastating diagnosis -- that she has HIV. And this make-believe encounter becomes all-too-real.

Cathryn Haeffele, a second-year medical student at UCLA, said of the interaction with "Twinkie," "It got to a point where I felt like, yes, like, you know, I am hearing this patient's story, and we're trying to figure out the next steps of care. It's really empowering being able to have that experience moving forward in the next steps of my medical education."

The actors walk away feeling empowered as well.

"I can feel it when I'm in the room," actress Elia Saldana said. "That what I'm doing, is doing some good."