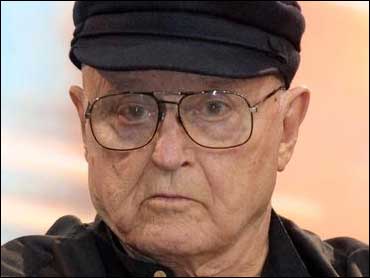 Rod Steiger, the beefy, intense actor who won the Academy Award as best actor of 1967 for his role as the unrelenting police chief of a small Southern town in "In the Heat of the Night," died Tuesday. He was 77.

Steiger died at a Los Angeles-area hospital at 9 a.m. of pneumonia and kidney failure, said his publicist, Lori De Waal.

A devoted practitioner of method acting, Steiger prided himself in undertaking challenging roles, especially real-life persons. "My generation of actors was taught to be able to create different people; that's what an actor is supposed to do," he explained.

He admitted that he made a big mistake in declining the lead in "Patton," believing the film would glorify war and killing. George C. Scott played the role, and it brought him an Academy Award.

Steiger had another brush with the Oscar in his early movie career. He had been the leading contender for "Marty" in the role he had created on television. But the producer, Burt Lancaster, wanted the loveless butcher to be a gentle character, and Steiger didn't qualify. Ernest Borgnine won the Oscar in the role.

Steiger played his most famous scene with Marlon Brando in "On the Waterfront." As the two brothers ride in the rear of a taxi, Brando castigates Steiger for making him throw a boxing match: "I coulda had class! I coulda been a contender."

The director, Elia Kazan, wrote in his 1988 autobiography, "A Life," that he shot Brando's closeups first because the actor had to leave the set early. Steiger complained that Kazan was favoring Brando. Kazan wrote: "I believe what had happened hurt his self-esteem but not his performance. If Steiger has played a scene better than that one, I have yet to see it."

Rodney Stephen Steiger was born April 14, 1925 in Westhampton, on Long Island, N.Y., the only child of a struggling song-and-dance team that parted soon after his birth. His mother married again, and the boy grew up in a quarrelsome household in Newark, N.J.. "I left home at 15 because my family had been destroyed by alcoholism," he remarked in 1998. Lying about his age, he enlisted in the Navy at 16 and served on a destroyer in the South Pacific. He was discharged the day after V-J Day.

Back in New Jersey, Steiger worked at a menial job for the Veterans Administration. Hoping to meet girls, he joined a drama group of office workers. His future was determined by his first role, in an old melodrama, "Curse You, Jack Dalton." Soon he was crossing to New York City to study drama at the New School for Social Research on his $75 monthly from the G.I. Bill of Rights. As a lark he also studied opera singing.

Steiger moved on to the American Theater Wing and then was accepted into the Actors Studio, joining a class that included Eva Marie Saint, Karl Malden, Kim Stanley and Marlon Brando.

"Elia Kazan and Lee Strasberg, the school directors, taught me to act from the inside out," Steiger remarked in a 1956 interview. "I learned what it means to talk to other persons in the story instead of reading lines in a phony voice." He credited psychoanalysis as an additional aid to his acting education.

Like others of his generation of actors, Steiger earned his seasoning in live television; between 1947 and 1953, he appeared in more than 250 dramas. His film debut came with a minor role in Fred Zinnemann's "Teresa" in 1951. Three years later, Kazan, Steiger's mentor at the Actors Studio chose him to play Brando's betraying brother in "On the Waterfront." The result: an Academy Award nomination as supporting actor and the beginning of a long film career.

Next he was cast as the villainous Jud in the big-budget filming of "Oklahoma!" The director, Fred Zinnemann, expected to dub Steiger's songs with a professional singer and use an experienced dancer to portray Jud in the ballet sequence. Stressing his opera training, Steiger convinced the director that he could measure up to star Gordon MacRae in their duet, "Poor Jud Is Dead." He underwent three days of grueling ballet lessons and managed a creditable performance in the Agnes DeMille dance.

Hollywood soon learned that the new star from the Actors Studio was strong-willed. In his next film, "The Big Knife," Steiger played a studio boss obviously based on the autocratic Harry Cohn. He dyed his hair white and wore a hearing aid. In his first scene with Jack Palance, he seemed to act as if the other actor wasn't there, ranting and weeping then making an exit. Palance because so incensed at the upstaging that he threw a stack of phonograph records at Steiger, who raced off the set and left the studio. The two actors later declared a truce.

Steiger established himself as a character actor who could bring power to his often villainous roles. His career crested in 1965 with "The Pawnbroker" as a Jew living a secluded life in Harlem, haunted by memories of his life in a Nazi prison camp. His performance brought him a second Academy Award nomination, and it would remain the film of which he was most proud.

Two years later he was nominated as the redneck sheriff in "In the Heat of the Night." He joined a formidable list of nominees: Warren Beatty, "Bonnie and Clyde"; Dustin Hoffman, "The Graduate"; Paul Newman, "Cool Hand Luke"; Spencer Tracy, "Guess Who's Coming to Dinner."

When Audrey Hepburn announced his name as winner, an astonished Steiger walked to the stage and kissed her hand. He concluded his thanks with a bow to costar Sidney Poitier "for the pleasure of his friendship which gave me the knowledge and understanding of prejudice to enhance my performance."

A prolific actor, Steiger often made three or four films a year, many of them forgettable. Among the notable ones: "Al Capone," "Seven Thieves," "The Loved One," "Doctor Zhivago," "No Way to Treat a Lady," "The Illustrated Man," "Waterloo," "Happy Birthday, Wanda June," "W.C. Fields and Me," "The Amityville Horror," "The January Man," "The Ballad of the Sad Cafe," "Mars Attacks!" and "Shiloh."

A man of large appetites, Steiger repeatedly became overweight and underwent a regimen to reduce. He was subject to periods of depression, and during the 1980s he did little work for eight years because of it. "I couldn't get out of bed in the morning," he said. He recovered, and his career became busier than ever.

Steiger was married and divorced four times: to Sally Gracie, actress Claire Bloom (with who he appeared in "Rashomon" on Broadway), Sherry Nelson and Paula Ellis. He and Bloom had a daughter, Anna, now an opera singer. A son, Michael Winston (named for the actor's heroes: Michelangelo and Winston Churchill) was born to him and Ellis in 1993. In 2000, he married Joan Benedict.

An interviewer once asked Steiger how he would like to die. He replied: "I don't want to, but if it's in front of a camera I wouldn't mind." His preferred tombstone: "See you later."