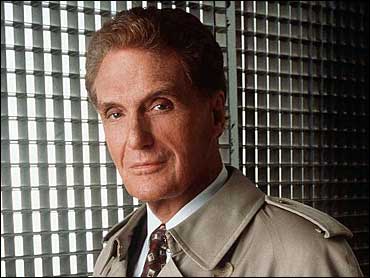 Robert Stack, whose granite-eyed stare and menacing baritone spelled trouble for fictional criminals in American TV's "The Untouchables" and real ones in "Unsolved Mysteries," died at his home. He was 84.

Stack's wife Rosemarie found him slumped over in the couple's Los Angeles home about 5 p.m. Wednesday. The actor underwent radiation treatment for prostate cancer in October, but his wife said he died of heart failure.

"He was feeling so good," she said Thursday. "He had a bout with a tumor but that was gone. It wasn't that, it was his heart. He was too weak. He wouldn't have lived through a bypass."

Although he had a lengthy film career beginning in 1939 with "First Love," Stack's greatest fame came with the 1959-63 TV drama "The Untouchables," in which he played Chicago crimebuster Eliot Ness and won a best actor Emmy.

That role, coupled with his job as host of the reality series "Unsolved Mysteries," created an enduring good-guy image.

"I think there's a definite carry-over from Eliot Ness," Stack said in a 1998 interview with The Associated Press. "Somebody once said, 'You really think you're Eliot Ness.' No, I don't think I'm Ness, but I sure as hell know I'm not Al Capone.' "

"He brought a bottle of 21-year-old Scotch and put it between us," Stack told the AP. "'There's a rumor going around that you're gonna try to be an actor.'

"I thought I'd give it a shot," Stack said he replied.

"Clark said, 'You're gonna be one thing: A pro. Show up on time, know your lines. ... And if you ever become a thing called a celebrity — a word I hate — if you ever do, and you use that power to push people around, I'm gonna kick you right in the (expletive).' "

Stack was born into a performing arts family in Los Angeles. His great-great-grandfather opened one of the city's first theaters, and his grandparents, uncle and mother were opera singers.

His father, however, "was the only Irishman in County Kerry who couldn't sing, and that's whose singing voice I got," Stack said in 1998.

Stack and his wife, Rosemarie, wed in 1956 and had two children, Elizabeth and Charles, both of Los Angeles. Mrs. Stack said the children were with her at the Stack home.