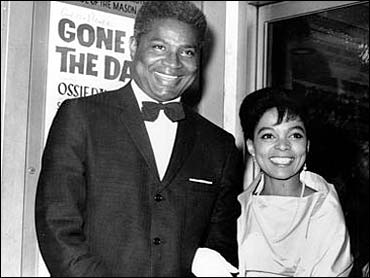 Ossie Davis, the actor distinguished for roles dealing with racial injustice on stage, screen and in real life, has died, an aide said Friday. He was 87.

Davis, the husband and partner of actress Ruby Dee, was found dead Friday in his hotel room in Miami Beach, Fla., according to officials there. He was making a film called "Retirement."

Davis, who wrote, acted, directed and produced for the theater and Hollywood, was a central figure among black performers of the last five decades. He and Dee celebrated their 50th wedding anniversary in 1998.

In Miami Beach, police spokesman Bobby Hernandez said Davis' grandson called the police shortly before 7 a.m. when his grandfather would not open the door to his room at the Shore Club Hotel. Davis was found dead and there does not appear to be any foul play, Hernandez said.

Davis had just started his movie on Monday.

"I'm absolutely shocked," said his agent Michael Livingston. "He was the most wonderful man I've ever known. Such a classy, kindly man." His wife had gone to New Zealand to make a movie there, Livingston said.

Their partnership called to mind other performing couples, such as the Lunts, or Hume Cronyn and Jessica Tandy.

Although they are accomplished individuals in their own right, it is almost impossible to think of one without the other.

It started in Harlem in the early 1940s. Davis was a playwright, who took to the stage to hone his craft; Dee was an up-and-coming light in the African American theater.

It was in 1946, in the Broadway production of "Jeb" that their fates collided.

"I was the lead," Davis told CBS News. "The young lady who was opposite me unfortunately couldn't get the southern accent quite right. Well, to our great surprise, the understudy turned out to be a young lady, Ruby Dee, who knew all the lines, all the moves, and was exquisitely professional."

What was her first impression of Ossie Davis? "A country bumpkin," Dee said, laughing. "He was tall and skinny and his clothes didn't fit. His sleeves landed in the middle of his arms and his pants didn't fit him."

It was the beginning of a union that would change the face of American stage and screen.

Among the first African American actors to break out of stereotypically "Negro" roles, Ossie Davis and Ruby Dee never separated their art from their activism.

Davis said, "We knew that every time we got a job and every time we were on stage, America was looking to make judgments about all black folks on the basis of how you looked, how you sounded, how you carried yourself. So, any role that you had was a role that was involved in the struggle for black identification. You couldn't escape it."

They accepted that responsibility with pride: from the roles that they chose, such as "A Raisin In The Sun," to the speeches they made. Together, they helped organize and played very active roles in the famous March on Washington in August, 1963. Davis famously eulogized Malcolm X both in real life, and again in the Spike Lee's film, "Malcom X."

Davis said, "I can't see how I could fulfill myself as an actor or a writer without being fully committed to living a full life as a citizen in this particular country."

Both had key roles in the television series "Roots: The Next Generation" (1978), "Martin Luther King: The Dream and the Drum" (1986) and "The Stand" (1994). Davis appeared in three Spike Lee films, including "School Daze," "Do the Right Thing" and "Jungle Fever." Dee also appeared in the latter two; among her best-known films was "A Raisin in the Sun," in 1961.

In 2004, Davis and Dee were among the artists selected to receive the Kennedy Center Honors.

At the award ceremony, Sean "P. Diddy" Combs said about the couple, "Ossie Davis and Ruby Dee have given great gifts. Not just to audiences, but the generation of African American writers, performers and directors who have traveled the road they have made."

When not on stage or on camera, Davis and Dee were deeply involved in civil rights issues and efforts to promote the cause of blacks in the entertainment industry. They nearly ran afoul of the anti-Communist witch-hunts of the early 1950s, but were never openly accused of any wrongdoing.

Davis, the oldest of five children of a self-taught railroad builder and herb doctor, was born in tiny Cogdell, Ga., in 1917 and grew up in nearby Waycross and Valdosta. He left home in 1935, hitchhiking to Washington to enter Howard University, where he studied drama, intending to be a playwright.

His career as an actor began in 1939 with the Rose McClendon Players in Harlem, then the center of black culture in America. There, the young Davis met or mingled with some of the most influential figures of the time, including the preacher Father Divine, W.E.B. DuBois, A. Philip Randolph, Langston Hughes and Richard Wright.

He also had what he described in the book as a "flirtation with the Young Communist League," which he said essentially ended with the onset of World War II.

"We young ones in the theater, trying to fathom even as we followed, were pulled this way and that by the swirling currents of these new dimensions of the Struggle," Davis wrote in the joint autobiography.

He lined up with black socialist reformer DuBois and singer Paul Robeson, remaining fiercely loyal to the singer even after Robeson was denounced by other black political, sports and show business figures for his openly communist and pro-Soviet sympathies.

In 1998, they published a dual autobiography, "In This Life Together."