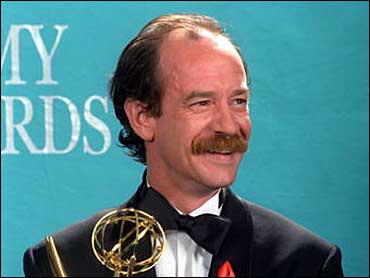 Michael Jeter, the character actor who won a supporting actor Emmy as a shrimpy assistant football coach on CBS's "Evening Shade" and was known on "Sesame Street" as The Other Mr. Noodle, has died, his publicist said Monday. He was 50.

Jeter's body was found in his Hollywood Hills home Sunday, publicist Dick Guttman said. Friends said they had communicated with him as recently as Saturday, Guttman added.

An autopsy was planned to determine the cause of death. Guttman said Jeter, who was HIV-positive but had been in good health, apparently died of natural causes.

Jeter had been filming the Christmas movie "The Polar Express." Guttman said the producers believe there is enough footage to preserve Jeter's role in the film.

"I often see myself in my private life as being a pinched and confined person. When I get on the stage I can open up," he said in a 1992 interview.

Among his favorite roles was the kindly Mr. Noodle on PBS's children's show "Sesame Street." The character was nicknamed The Other Mr. Noodle when Jeter took over the role from Bill Irwin. The two Noodles, the show explained, were brothers.

"Kids would recognize him and come running up to him, 'Mr. Noodle! Mr. Noodle,"' Guttman recalled. "He really loved that."

On "Evening Shade," which ran from 1990 to 1994, Jeter played the blustery assistant football coach Herman Stiles opposite the calm, paternal lead character played by Burt Reynolds. He won his Emmy in 1992.

He had film roles as a kindhearted mental patient in 1998's "Patch Adams," a mouse-loving prisoner in 1999's "The Green Mile" and a dinosaur-hunting mercenary in 2001's "Jurassic Park III."

Jeter grew up in Lawrenceburg, Tenn., and studied acting at Memphis State University.

He worked in theater and in small film roles in the 1970s and '80s, but after two bouts of drug and alcohol abuse he decided the irregular life of a performer was too much for him.

He became a legal secretary and abandoned acting until a casting director sought him out in 1987. He was offered a small role in CBS's "Designing Women," made by the same people who would later produce "Evening Shade."