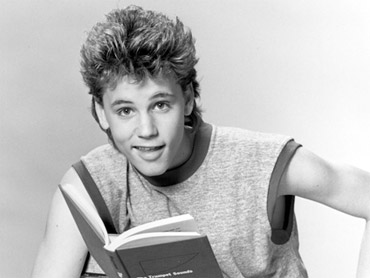 In the 1980s, Corey Haim became a teen pin-up favourite, a baby-faced idol with an infectious grin and a "firecracker" personality.

But as he shot to stardom with a string of hit films including the 1987 vampire smash "The Lost Boys," the promising Toronto-born actor fell into a debilitating battle with drugs and alcohol that he later blamed for ruining his career and destroying his health.

On Wednesday, Haim died in Los Angeles at age 38. Police said the actor had flu-like symptoms before he died and was getting over-the-counter and prescription medications. An autopsy is expected to determine the cause of death and officials say there was no evidence of foul play.

Over the last decade, a noticeably heavier Haim could frequently be spotted hanging out on bar patios in Toronto or tossing around a Frisbee in neighbourhood parks. More recently, he struggled to mount a career comeback in Los Angeles.

Andrew Sabiston, who starred with Haim in the mid-1980s on the CBC-TV show "The Edison Twins," painted a starkly different picture of the budding star he worked with - an up-and-comer brimming with energy and enthusiasm.

"He was always this little firecracker," Sabiston said. "He was always prepared. Right into it. Loved the excitement of being on a set. He was professional."

Haim had been open about his struggle with drug and alcohol abuse in recent years, telling a London tabloid in 2004 that he smoked his first joint while working on "The Lost Boys," which co-starred Kiefer Sutherland and Jason Patric, and that things escalated from there.

"I did cocaine for about a year and a half, then it led to crack," he told The Sun.

After 15 attempts at rehab he suffered a stroke. He says he was 200 pounds at the time and was put on prescription drugs.

"I started on the downers which were a hell of a lot better than the uppers because I was a nervous wreck," he said. "But one led to two, two led to four, four led to eight, until at the end it was about 85 a day."

Haim was intent on kicking unhealthy habits in recent years, says friend Orlena Cain, who met the actor at a Toronto pub in 2005. He was overweight and she didn't recognize him at the time.

"I had to grab my thoughts for a second. We talked that day and he said, 'You know, I'm kind of trying to make my way back. I'm looking for friends. I can't really trust a lot of people."'

Former CFL player Fabian Rayne said he tried to help Haim turn his life around two or three years ago at his health club.

"He was trying to get back into shape and get his life together," Rayne said.

In his heyday, the actor was a box office draw with his boyish good looks and goofy grin. He and fellow teen sensation Corey Feldman, who co-starred with Haim in "The Lost Boys," "License to Drive," "Dream A Little Dream" and "Dream A Little Dream 2," became known as "The Two Coreys" - a relationship they parlayed into an attempted comeback in 2007 with an A&E reality series of the same name.

Haim got his start in TV commercials at 10. But after his string of '80s hits, he had trouble finding work.

His fall from grace included an application for Chapter 11 bankruptcy protection in 1997, in which he listed debts for medical expenses and more than $200,000 in state and federal taxes.

"This is not a stunt," stated the ad, composed of white lettering on a black-and-white photo of a smiling Haim. "I'm back. I'm ready to work. I'm ready to make amends."

For a time, the attempts seemed to work. Haim made a few TV appearances, several direct-to-video movies and had more films in production, according to his IMDB page.

But his battle with drugs appeared to be a constant struggle. "The Two Coreys" was cancelled in 2008 after just two seasons, with Feldman later blaming Haim's drug abuse for straining their working and personal relationships.

Cain says she never saw Haim use drugs but noted that he often seemed depressed. At times, she said she loaned him money so that he could travel to nearby Pickering, Ont., to work out with Rayne.

"He was depressed but he was still his charming self," said Cain.

"In Corey's mind, he was still that '80s heartthrob that could win girls' hearts over.... I'm so sad that no one will really ever get to see that part of him now because he's gone. No one could help him."