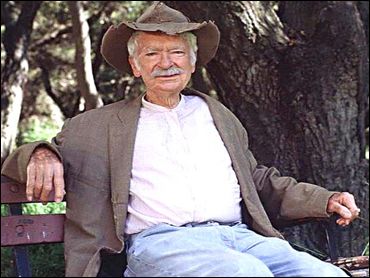 Buddy Ebsen, the loose-limbed dancer turned Hollywood actor who achieved stardom and riches in the television series "The Beverly Hillbillies" and "Barnaby Jones," has died, a hospital official said Monday. He was 95.

Ebsen died Sunday morning at Torrance Memorial Medical Center in Torrance, said Pam Hope, an administrative nursing supervisor. He had been admitted to the hospital, near his home in Palos Verdes Estates, last month for treatment of an undisclosed illness.

"He was so versatile," said long-time entertainment reporter Tom Hatten of CBS radio station KNX Los Angeles. "His work on-screen will always be enjoyed for different reasons. He could do anything, he really could."

Ebsen and his sister Vilma danced through Broadway shows and MGM musicals of the 1930s. When she retired, Ebsen continued on his own, dancing with Shirley Temple and turning dramatic actor.

Except for an allergy to the aluminum-dust makeup, he would have been one of the Yellow Brick Road quartet in the classic "The Wizard of Oz." After 10 days of filming, Ebsen, playing the Tin Man, fell ill because of the aluminum makeup on his skin and had to be hospitalized. He was replaced by Jack Haley.

"I think Buddy Ebsen was bitter all his life that he didn't get to be in this great motion picture classic," Washington Post television critic Tom Shales told CBS Radio News.

As Jed Clampett, the easygoing head of a newly rich Ozark family plunked down in snooty Beverly Hills, Ebsen became a national favorite. While scorned by most critics, "The Beverly Hillbillies" attracted as many as 60 million viewers on CBS between 1962 and 1971.

"As I recall, the only good notice was in the Saturday Review," Ebsen once said. "The critic said the show possessed 'social comment combined with a high Nielsen, an almost impossible achievement in these days.' I kinda liked that."

The show was still earning good ratings when it was canceled by CBS because advertisers shunned a series that attracted primarily a rural audience.

Ebsen returned to series TV in 1973 as "Barnaby Jones," a private investigator forced out of retirement to solve the murder of his son Hal, who had taken over the business.

"Barnaby Jones" also drew critical blasts. But Ebsen's folksy manner and a warm relationship with his daughter-in-law, played by Lee Meriwether, made the series a success.

"With such a glut of private-eye shows, I didn't see how another one could succeed," Ebsen once said. "I really thought the network was making a mistake." But the series clicked and lasted until 1980.

"He probably wouldn't go on anyone's list of the major talents of the 20th century, but he had two hit television shows and neither would have been a hit without him, I don't think," said Shales.

Ebsen, who was 6 feet 3, jerked sodas until he landed a chorus job in the 1928 "Whoopee," starring Eddie Cantor. The dancer sent for his sister Vilma and they formed a dancing team that played vaudeville, supper clubs and shows such as "Flying Colors" and "Ziegfeld Follies."

A screen test led to an MGM contract for the dance team, and they were a hit in "Broadway Melody of 1936."

Ebsen was earning $2,000 a week at MGM in 1938, when studio boss Louis B. Mayer summoned him and announced: "Ebsen, in order to give you the parts you deserve, we must own you."

The dancer recalled that he replied: "I'll tell you what kind of a fool I am, Mr. Mayer, I can't be owned." He quit his contract, returning to touring as a dancer and playing Chicago for more than a year in a farce, "Good Night, Ladies." He served three years in the Coast Guard during World War II.

Ebsen toured in "Show Boat," then returned to Hollywood. Producers asked his agent: "Why hasn't he been working in pictures?" His luck began to change when director Norman Foster recommended him to Walt Disney to play Davy Crockett.

Disney had already chosen a young Texan, Fess Parker, for the role but he hired Ebsen as Crockett's partner. When the Crockett episodes were shown on the "Disneyland" series in 1954-55, both Parker and Ebsen became heroes.

In 1993, he made a cameo appearance as Barnaby Jones in the film version of "The Beverly Hillbillies."

He was born Christian Rudolph Ebsen in Belleville, Ill., on April 2, 1908. His father owned a dancing school, where the nicknamed Buddy learned the fundamentals. The family moved to Orlando, Fla., when the boy was 10, and he began pre-medical studies at the University of Florida and Rollins College. But family financial problems forced him to leave school and, at 20, he decided to try his luck as a dancer in New York.

"I arrived in New York with $26.25 in my pocket and a letter of introduction to a friend of a friend's cousin," he recalled. "I got a job in a road company, but the producer said, 'That boy one foot taller than the rest of 'em — out!'"

Over the years, the actor also found time to write musical shows, a play, fiction and his autobiography.