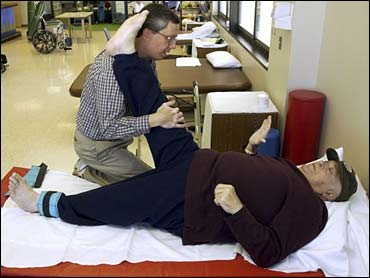 Vito Buffalo didn't let his age stand in the way of open spine surgery to relieve his back pain. The 73-year-old retired butcher from Wauconda, Ill., said he needs to feel good because he leads an 18-piece swing band.

"I'm a singer, and there are a lot of songs I have not yet sung," he said, explaining his decision to try surgery.

Active senior citizens like Buffalo are choosing — sometimes demanding — surgery that once would have seemed extreme for older patients. Healthier older people and medical advances make it possible for surgeons to say yes to those demands.

"Obviously we turn some patients away, but that group is getting smaller and smaller," said Dr. Dean Karahalios, the Chicago neurosurgeon who did Buffalo's surgery.

Now he's teaching the procedures to other surgeons and predicts the technique will be done on an outpatient basis across the country in five to 10 years. He's even done these surgeries on patients in their 90s.

"Age is not such an issue anymore," he said.

In the past, research on surgery excluded patients older than 75, so there was little evidence on risks and benefits for older people.

But with life expectancy increasing and the baby boomers looking forward to retirement, researchers are giving the elderly a close look.

One study found that people 76 and older recovered more slowly than younger patients after heart bypass surgery. But one year later, the improvements they felt in pain relief and quality of life were the same as for younger patients.

"That was very encouraging and gave us confidence," said Dr. John Spertus, professor of medicine at the University of Missouri-Kansas City, a researcher on the bypass study. Heart doctors are treating more older patients and need guidance on how to counsel them, he said.

Doctors should tell older patients to expect their recovery from bypass to take a full year, he said, but they can tell them to expect good results.

It's a discussion he doesn't take lightly.

"Every cardiologist carries ghosts on his shoulder, things that have not worked out as is hoped," he said. "It always gives one pause."

Other than her blocked arteries, Tutlewski was in good health, which she credits to twice-daily beach walks with her golden retriever Gingersnap.

Her heart doctor told her that improvements in surgical techniques could help her, she said. She talked it over with her family and decided on the surgery. It went well.

How quickly she came home after surgery surprised everyone.

"They had told us to expect, at the minimum, 10 days" in the hospital, said one of her daughters-in-law, Delores Tutlewski. But after five days, "the nurses told us, 'We can't keep up with her. She's walking down the hallway.' She had cleaned her room. She was making her bed."

One survey of plastic surgeons found the number of cosmetic procedures in patients age 60 and older increased by 35 percent from 2000 to 2003. The numbers are reported as an average number per surgeon. In 2000, per-surgeon average was 98; in 2003, it was 133.

In a published study, plastic surgeon Dr. Ferdinand Becker found that his older facelift patients had no greater risk for complications when he compared them to younger patients with the same risk factors. An 80-year-old patient with well-controlled diabetes, for example, had no greater risk than a 50-year-old in the same physical condition.

"Let's face it, these people chose their parents well," he said. "They have good genes."

The over-65 crowd accounts for 12 percent of the U.S. population, but undergoes 40 percent of surgeries, said Dr. John Burton, who directs the Geriatrics for Specialists Initiative of the American Geriatrics Society.

As the nation ages, surgeons will find more of their time spent treating older patients, he said. "It's where the action is."

Burton, a professor at Johns Hopkins University School of Medicine, predicts a rise in the number of geriatric surgeons as doctors realize that managing an elderly patient's care requires special knowledge.

At age 91, Katie Shears wasn't an obvious candidate for surgery to remove a tumor, said Dr. Michael Simon, an orthopedic surgeon at the University of Chicago. Most patients her age, not counting on many more years of life, would choose radiation alone to treat the cancer growing in her thigh, he said.

But Shears chose radiation and surgery, and the doctor went along with the decision, although he feared she would end up sicker, facing a long hospital stay.

Shears surprised the surgeon. "She whizzed through it with no complications at all," Simon said. She now is free of cancer and is back home with her daughter in the Avalon Park neighborhood of Chicago.

"I talked to God about it and asked him to be with the doctor to give him the knowledge to do it," she said.

Buffalo, the singer who had spine surgery, said he's free of the excruciating back pain that had slowed him down. He said the pain from surgery and the hard work of physical therapy are worth the results.

"I don't care if I have one year left or three or six," Buffalo said. "I want to be able to go and see my grandkids."
By Carla K. Johnson