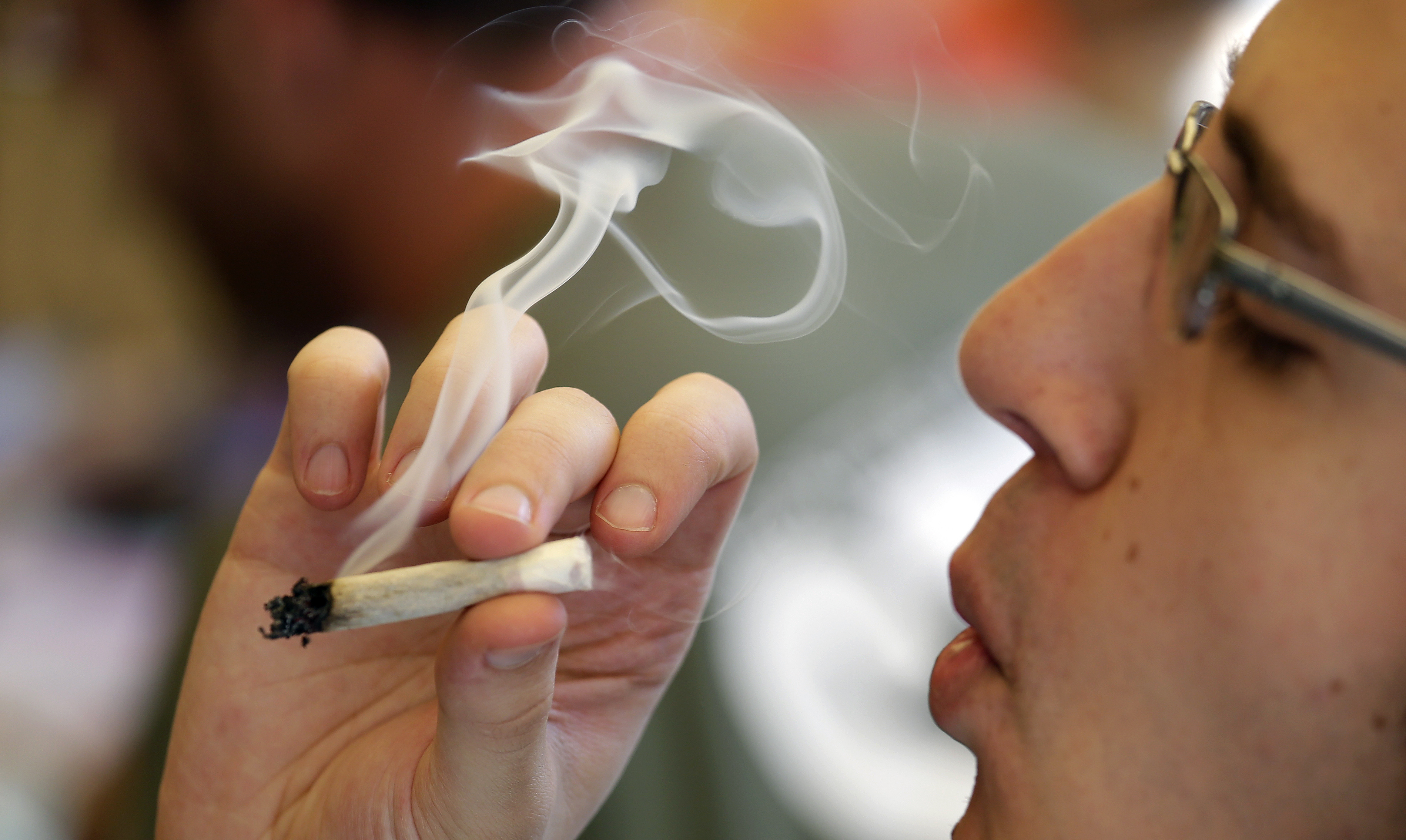 SAN FRANCISCO-- Thousands of people sent up a cheer and a collective plume of marijuana smoke at the stroke of 4:20 p.m. Wednesday in San Francisco's Golden Gate Park.

The annual celebration of all things marijuana attracted thousands to the park's "Hippie Hill" to toke up, eat and drink the afternoon away into the night. A plane dragging a banner encouraging attendees to "smoke weed" circled overhead, while unlicensed vendors set up tables and makeshift tents to sell all types and strains of bud, not to mention T-shirts, pipes and food.

In some cases, the revelers came to the park before dawn, with hundreds if not several thousand gathered by noon, CBS San Francisco reported.

Fans of the drug have long marked April 20 as a day to roll weed or munch on pot-laced brownies and call for increased legal access to it.

A man held aloft an eight-inch bud of marijuana he said weighed more than three grams, on sale for $100. Nearby, liquid tinctures said to contain the active ingredient in marijuana were selling for $10 for a four-ounce bottle. There were plenty of laced Jolly Ranchers, homemade brownies and cookies and other edibles available.

Marlene Manning, pushing a stroller with her six-month-old granddaughter, was glad to be back in her native California for the annual 4/20 celebration. She wasn't partaking, but said she was celebrating freedom.

"This is so refreshing," the 50-year-old woman said, adding that she just relocated from Florida, where "everything is against the law."

While police were not planning to crack down on marijuana use, officers were on hand to look out for unruly behavior, CBS San Francisco reported.

"For those who come and plan to create any kind of havoc whatsoever, we plan to be very swift with arrests and removing those individuals," Capt. John Sanford of the San Francisco Police Department said earlier this week.

"I'm pretty sure everybody's going to be on their best behavior," said pot enthusiast Doris Gaffney. "Not too crazy."

This year's celebrations throughout the U.S. come amid loosening of marijuana restrictions and increasing tolerance for the plant's use from Alaska to Massachusetts.

It could be the last unofficial pot holiday on which users have to call for legalization in California, with a pot initiative expected on the November ballot. The drug's use for medical purposes got approved in 1996.

Voters in Nevada, Arizona and Massachusetts also are expected to consider marijuana legalization measures. And the Vermont Legislature is discussing a proposal to legalize the possession of up to one ounce.

Recreational use already is legal in Colorado, Washington, Oregon and Alaska.

In Anchorage, Alaska, a downtown marijuana pot club scheduled a "420 Blaze Party" in a state where recreational use is legal but sales of weed aren't until later this summer.

"We're a private club, we're an events club and our members can consume their own product," said one of the owners, Theresa Collins. The club is offering a free shuttle home for attendees.

Police in Burlington, Vermont, said several hundred gathered on the University of Vermont campus to celebrate. In New Hampshire, dozens of people smoked marijuana on the Statehouse lawn in Concord.

Several Las Vegas marijuana businesses held grand opening ceremonies, including the Cannabis Chapel, which offered customers a pot-themed wedding package complete with a silk cannabis bouquet -- all for $104.20. Nevada voters legalized medical marijuana use in 2000, but it wasn't until 2013 that lawmakers created rules allowing for dispensaries.

One new dispensary, Blum, opened its pristine shop Wednesday in a gritty industrial park a few blocks from the Las Vegas Strip. Dispensaries are banned in the tourist corridor, so owners are banking on shuttles to bring them some of the more than 40 million who visit the city each year.

The origins of the number 420 as a code for marijuana are murky. The most accepted version is rooted in a public high school in Marin County, California, across the Golden Gate Bridge north of San Francisco.

There, a group of 1970s high school students say they coined the number as code for the time to meet after school to toke up.