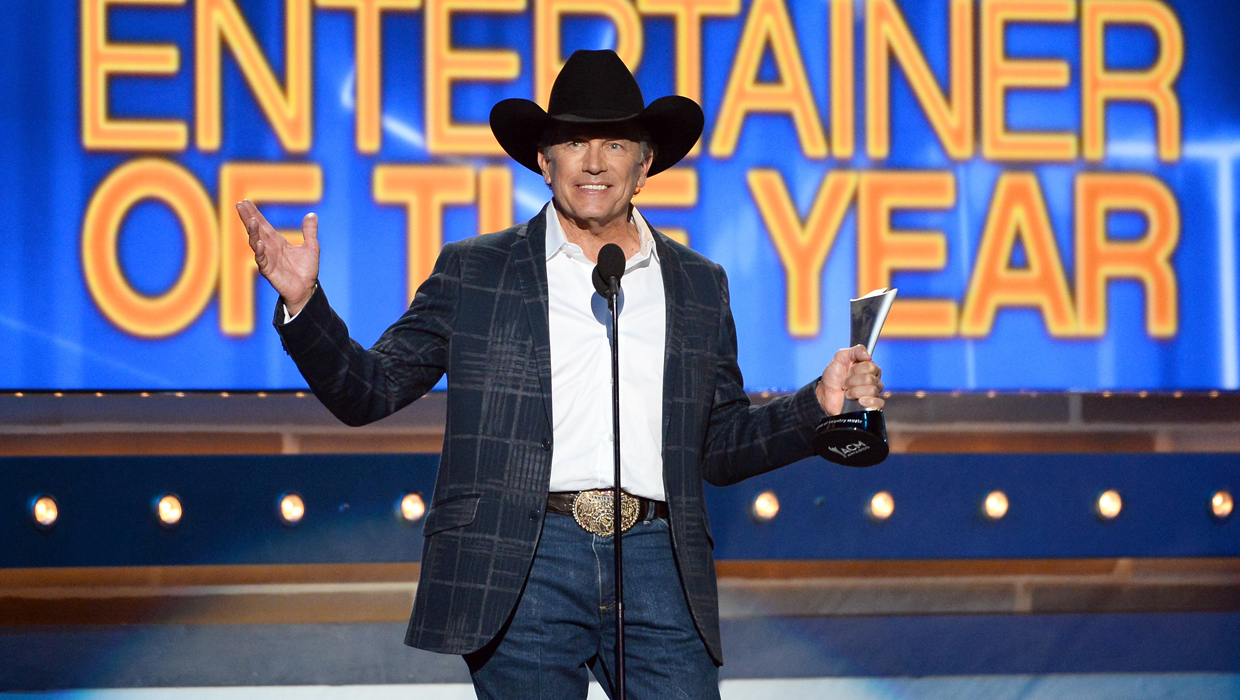 There was no denying it -- the audience at the 49th Academy of Country Music Awards seemed thrilled when George Strait won the night's biggest prize: the fan-voted entertainer of the year honor.

"Wow... I always said I had the best fans in the world and I heard this was a fan-voted thing, so I rest my case," said the 61-year-old singer, who beat Taylor Swift, Miranda Lambert and the evening's co-hosts Luke Bryan and Blake Shelton. "This is so amazing. This has been an amazing past 30 years."

Strait was in good company. Lambert and Keith Urban were the top ACM winners, snagging three awards each.

And Bryan and Shelton weren't lying when they said the 49th Academy of Country Music Awards would be all about live music on Sunday. It wasn't until the start of the CBS show's second hour that an award was handed out. Florida Georgia Line scored the night's first honor -- vocal duo of the year. Justin Moore got choked up while accepting the new artist of the year trophy, topping Brett Eldredge and Kip Moore.

Lee Brice's "I Drive Your Truck" won song of the year. "This is not for me -- this is for the writers," he said pointing to the track's songwriters.

The Band Perry, who won vocal group of the year, called it a "mountaintop moment."

Jason Aldean, who took home male vocalist of the year, told the crowd, "This is really unexpected. It was a shock last year to win it and even a bigger shock this year, I think...It's been one hell of a ride. I hope it doesn't end anytime soon." He beat out Brice, Bryan, Shelton and Urban for the honor.

"I was just hanging out with (presenter) Trisha Yearwood back there, holy crap, and I was standing next to Sheryl Crow, a complete and utter rock star," Lambert said, adding, "Kacey Musgraves, I grew up with her. She wrote the single of the year this year. And Carrie Underwood's my buddy, y'all, and she's a phenomenon. I can't believe it, I'm so grateful and humbled. I love my job."

Urban scored a few wins before the three-hour telecast, including producer and performer honors. He saw another win when he and Lambert took home vocal event of the year for their duet "We Were Us." The video of the year went to Tim McGraw's "Highway Don't Care," featuring Urban and Swift.

The Band Perry got the evening started with a bang, heating up the MGM Grand's Garden Arena in Las Vegas with the new single "Chainsaw."

It was the first of what would become a music-filled evening with stand-out performances by Florida Georgia Line and Shelton, who performed his new single, "My Eyes" and later took the stage with Shakira. Martina McBride introduced Strait, one of the evening's most anticipated performers, calling him a "legend." The veteran singer brought the audience members to their feet with his performance of "I Got a Car." Another highlight? Stevie Nicks taking the stage with Lady Antebellum for a performance that included "Golden" and Fleetwood Mac's "Rhiannon." And Darius Rucker further proved he's got this country thing on lock-down with an audience sing-a-long version of "Wagon Wheel."

Lambert and Strait joined forces for a Merle Haggard tribute, performing a medley of hits for the singer, who also celebrated his 77th birthday. Garth Brooks presented Haggard with the academy's Crystal Milestone Award, and the crowd joined in to sing "Happy Birthday." Earlier in the day, Haggard tweeted: "'I wish I could be thirty again' but instead I'm 77. Thank you all for the happy birthdays!"

Country music flowed throughout the show. Dierks Bentley hit the stage with Sheryl Crow for a rendition of "I Hold On," and Brad Paisley made the national television debut of his new single "River Bank."

The night's co-hosts stepped into the spotlight with a string of jokes and digs at each other, along with audience members. Bryan poked fun at Shelton, saying he and his wife, Miranda Lambert, could star on Broadway in "Beauty & the Beast."

"More like entertainer of the minute," Bryan responded. "And I'm spotting you 30 seconds." Ouch.

The co-hosting duo joked about same-sex marriage (what happens you're in a longtime relationship), called out Eric Church over the likelihood of finding marijuana in his dressing room and even tossed in a Miley Cyrus mention and a Britney Spears dig.

"If you don't like live music, then you better go down the block to see Britney Spears," said Shelton, referring to the pop star's nearby Vegas residency.

And you might think it's all about country music at the ACMs. But that was far from the case this year as artists from various genres and other celebrities walked the red carpet, including Olivia Munn and Jamie Lynn Spears.

And the country music world is already looking ahead to next year. Shelton and Bryan announced that the 50th annual ACM Awards will be held at the Dallas Cowboy's stadium in Arlington, Texas.

"We'll see ya'll in Texas for our big 50th anniversary!" Shelton said at the end of the night.