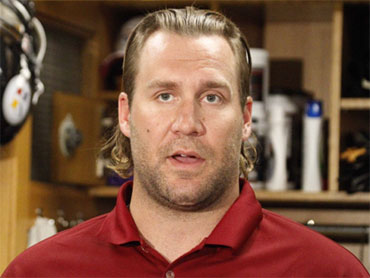 The young woman who accused Ben Roethlisberger of sexual assault said she tried to get away from the Pittsburgh Steelers quarterback and told him "no, this is not OK," according to police documents released Thursday.

In a statement to police on March 5, the 20-year-old college student said Roethlisberger encouraged her, and her friends, to take numerous shots of alcohol. Then one of his bodyguards escorted her into a hallway at the Capital City nightclub, sat her on a stool and left. She said Roethlisberger walked down the hallway and exposed himself.

"I told him it wasn't ok, no, we don't need to do this and I proceeded to get up and try to leave," she said. "I went to the first door I saw, which happened to be a bathroom."

According to her statement, Roethlisberger then followed her into the bathroom and shut the door.

"I still said no, this is not OK, and he then had sex with me," she wrote. "He said it was OK. He then left without saying anything."

The woman's statements were among hundreds of pages of the case file made public Thursday by the Georgia Bureau of Investigation.

Two of her friends said they saw a bodyguard lead her into the hallway and then saw Roethlisberger follow. They said they couldn't see their friend but knew she was drunk and were worried about her.

Ann Marie Lubatti told police she approached one of Roethlisberger's two bodyguards and said, "This isn't right. My friend is back there with Ben. She needs to come back right now."

She said the bodyguard wouldn't look her in the eye and said he didn't know what she was talking about. The GBI later identified that bodyguard as Ed Joyner, and the GBI also determined that the man who led Roethlisberger's accuser down the hallway was Anthony Barravecchio. Joyner is a Pennsylvania trooper and Barravecchio is an officer on the force in the Pittsburgh suburb of Coraopolis.

Attorney Michael Santicola, who represents Barravecchio but said Joyner also is a longtime friend, confirmed on March 10 that the two officers were present, but not in an official capacity. He said the two men are friends with Roethlisberger and did not witness any criminal activity or inappropriate behavior. He said the officers "have no memory" of meeting his accuser.

Lt. Myra A. Taylor, a spokeswoman for Pennsylvania State Police, said Thursday night the agency is getting a copy of the investigative report from Georgia authorities. "We will thoroughly review the report and determine if there is a violation of Department regulations on the part of Trooper Edward Joyner," she said.

Earlier this week, prosecutors said no charges would be filed against Roethlisberger, who has denied the accusations through his attorney. Ocmulgee Circuit District Attorney Fred Bright said Monday the woman's accusations could not be proven beyond a reasonable doubt and that the woman had asked him not to pursue the case. Roethlisberger also is being sued in civil court by a former Nevada hotel employee for an alleged sexual assault in 2008. No criminal charges were filed in that case.

According to the investigators' summary of events, Roethlisberger friend Brad Aurila had a conversation with the quarterback when they returned to his house that night and asked him why police showed up at the nightclub. In an interview with police, Aurila said Roethlisberger told him nothing had happened and that he "was in the back with a girl and they were 'messing around."' Aurila said he "took 'messing around' to mean 'kissing, whatever."'

In her first statement to police hours after the incident, the woman said she and her friends first saw Roethlisberger at Velvet Elvis.

"He then met us at the Brick and called us a 'tease.' Eventually, we saw him at the Capital City and saw him there. We said 'hey' and he started talking to (redacted) (nothing in particular) and his bodyguard took him back to the room w/ bathroom," she wrote. "I said, 'I don't know if this is a good idea' and he said, 'It's OK.' He had sex with me and meanwhile his bodyguards told my friends they couldn't pass them to get to me."

In a second statement on March 5, the woman went into more detail about the encounters with Roethlisberger, saying that he made "crude, sexual remarks" when the two groups encountered each other at the second bar, before they went to Capital City.

There, Roethlisberger was surrounded by women, according to statements made by the accuser's friends.

"At the back of Capital City, the room was blocked off for him and females only," Nicole Biancofiore wrote in a statement to police.

After the accuser emerged from the bar and told Biancofiore and Lubatti about the encounter, the women left.

"I walked up to the first cop car we saw and told them what happened," Lubatti said in a statement.

NFL commissioner Roger Goodell is reviewing the matter and Steelers president Art Rooney II said Thursday that the league and team probably won't settle on any punishment until after next week's draft.

"When we get to the point where we have agreed with the commissioner on what that action will be, that's when it will be imposed," Rooney said. "After imposing an appropriate level of discipline and outlining the steps we feel will be necessary to be successful as a player and a person, we intend to allow Ben the opportunity to prove to us he is the teammate and citizen we all believe he is capable of being."

Sparked partly by the Roethlisberger incident, Goodell sent a memo last week to NFL owners, executives and head coaches emphasizing the importance of the league's personal conduct policy. According to the memo, which was first reported by the New York Times, the absence of criminal charges is not enough to excuse poor behavior.

"Unfortunately, in recent weeks there have been several negative incidents," the memo stated. "These incidents include subjects that we have previously identified as particularly troublesome, such as alcohol-related offenses, allegations of violence against women, and weapons offenses. ... The policy makes clear that NFL and club personnel must do more than simply avoid criminal behavior. We must conduct ourselves in a way that is responsible, that promotes the values upon which the league is based, and is lawful."

The Roethlisberger case has infuriated the Steelers.