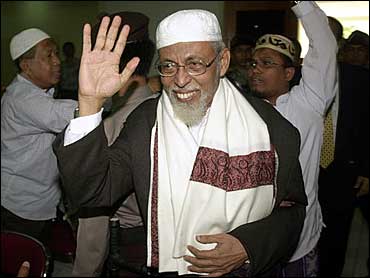 Militant cleric Abu Bakar Bashir accused the United States of terrorism in Iraq and Afghanistan on Wednesday, hours after being released from prison to cheers of "God is great!" One of his first stops was an Islamic school notorious for producing some of Indonesia's deadliest militants.

Bashir, 68, walked out of Jakarta's Cipinang prison after serving 26 months for conspiracy in the 2002 Bali bombings that killed 202 people and thrust the world's most populous Muslim nation onto the front line of the war on terror.

Australia and the United States, which have accused the firebrand cleric of being a key member of the al QaEda-linked militant group Jemaah Islamiyah, said they were disappointed at his release.

But as always, Bashir was quick to point his finger at them.

"The United States is a state terrorist because it is waging war against Muslims in Iraq and Afghanistan," he said, as he headed in a convoy to the central Javanese city of Solo, a 10-hour journey. "This is the kind of thinking we can expect from infidels."

Jemaah Islamiyah is accused of carrying out church bombings across Indonesia in 2000, the 2002 Bali bombings, attacks in the Indonesian capital in 2003 and 2004, and a triple suicide bombing on Bali last October. The attacks together killed more than 260 people.

Victims of the 2002 bombings said they were disappointed to see Bashir walk free.

"It's hard to imagine how a leader of a gang ... can get only two years for orchestrating to kill 200 people and injuring many more," said Australian Peter Hughes, 46, who suffered burns to 56 percent of his body in the attack. "It doesn't make sense."

Indonesia, which has arrested and convicted more than 150 militants in recent years, three of whom were sentenced to death, rejected any suggestion that it was a weak link in the fight against terror.

"As he has served his sentence, I hope other countries will not politicize this," said Foreign Minister Hassan Wirajuda, adding he had received no official complaints.

Bashir's freedom has raised concerns that he could energize Indonesia's small, Islamic radical fringe by making impassioned speeches at rallies and mosques, but few believe he will play any direct role in terrorism.

Upon arriving in Solo late Wednesday, Bashir stopped briefly at a hospital for a checkup and then went straight to the al-Mukmin boarding school that he founded in 1972, where he was met by hundreds of students who shouted "God is great!"

Several graduates of the school are in prison for involvement in terrorism, at least two others became suicide attackers.

Before the Bali blasts, Bashir was chiefly known for his vocal support of moves to make the secular country an Islamic state and his vitriolic criticism of U.S. policy toward Muslim countries. He has always maintained his innocence.

Police have no plans to investigate him for past crimes but will keep him and his followers under close observation. Indonesia's State Intelligence Agency chief, Syamsir Siregar, said he hoped Bashir would "regain his self-awareness and be willing to cooperate with us."

Sidney Jones, a Jemaah Islamiyah expert from the International Crisis Group, said she thought his release would not lead to more terror attacks, but that "he will reinforce anti-Western feelings.

"But I don't think he'll necessary push people over the line from radical rhetoric to violence."

The U.S. State Department expressed deep disappointment about what it called Bashir's light sentence despite his participation in a "sinister" conspiracy.

Australian Prime Minister John Howard told Parliament he shared the displeasure of many of his compatriots over Bashir's release.

"I want them (Indonesia) to understand from me, on behalf of the government, how extremely disappointed, even distressed, millions of Australians will be at the release of Abu Bakar Bashir," Howard said.

No evidence has ever been presented linking him to the execution, preparation or commission of terrorist attacks, and most analysts say he played no operational role in the group's attacks.

The turnout at the prison when he was released Wednesday was small - some 150 people turned out - despite efforts by his supporters to rally a large crowd, and no mainstream Islamic figures or politicians were present, underscoring his isolated following.