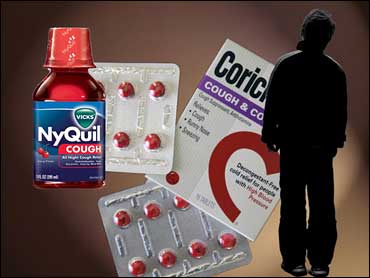 About 3.1 million people between the ages of 12-25 have used cough and cold medicine to get high, the government reported Wednesday.

The number of young people who abused over-the-counter cold medicines is comparable to use of LSD and much greater than that for methamphetamine among the age group, according to the federal Substance Abuse and Mental Health Services Administration.

The agency's 2006 survey on drug abuse and health, reported in the National Survey on Drug Use and Health, found that more than 5 percent of teenagers and young adults had misused cough and cold medicines and indicated that these people also had experimented frequently with illicit drugs.


On The Saturday Early Show on Jan. 12, 2008, medical contributor Dr. Mallika Marshall added perspective and insight to this story. To read her comments, CLICK HERE.
Nearly 82 percent also had used marijuana. Slightly less than half also used inhalants or hallucinogens, such as LSD or Ecstasy, the agency said.

The cough suppressant DXM is found in more than 140 cough and cold medications available without a prescription. When taken in large amounts, DXM can cause disorientation, blurred vision, slurred speech and vomiting.

Those who misused an OTC cough and cold medication in the past year most reported misusing a NyQuil® product (30.5 percent), a Coricidin® product (18.1 percent), and a Robitussin® product (17.8 percent).

"While increasing attention has been paid to the public health risk of prescription drug abuse, we also need to be aware of the growing dangers of misuse of over-the-counter cough and cold medications, especially among young people," said Terry Cline, the agency's administrator.