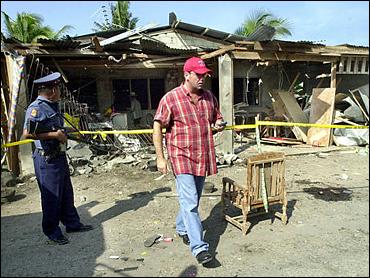 Philippine authorities blamed the notorious Abu Sayyaf terror group for a bombing attack that killed an American Green Beret and two Filipinos outside a restaurant frequented by troops.

The explosion Wednesday evening shattered an open air market and injured more than two dozen people, including another Green Beret who was airlifted out of the country for treatment, a U.S. official said Thursday.

The driver of a motorcycle in which the nail-laden bomb was stashed was identified as an Abu Sayyaf member from a sketch based on witness accounts and his body, Ebdane said Thursday. The man was killed when the bomb went off.

When asked by The Associated Press whether the Abu Sayyaf or the communist New People's Army was responsible for the blast, Ebdane replied, "It's not NPA. It's Abu Sayyaf."

The Abu Sayyaf warned last week it would mount attacks on civilian, military and U.S. targets in the Philippines to retaliate for the ongoing government offensive against Muslim rebels in the southern Philippines.

Only the motorcycle's charred handlebars and frame remained after the blast, and investigators, including five Americans in civilian clothes, used rubber gloves to collect nails and other debris, sniffing them for traces of explosives before putting them in evidence bags.

The explosion occurred at about 8:30 p.m. in Zamboanga, where security already had been tightened in advance of an Oct. 12 Christian festival in the middle of the sprawling archipelago's southern Muslim heartland.

The Green Berets, based across the street from the blast site at Camp Enrile, were part of a U.S. contingent of about 260 personnel deployed in support of Operation Enduring Freedom, which has helped train the Philippine military to fight the Muslim guerillas.

The Green Berets are from the 1st Special Forces Group at Fort Lewis, Wash., said Army Maj. Cynthia Teramae, a spokeswoman with the U.S. Pacific Command in Hawaii.

U.S. military officials told The News Tribune of Tacoma, Wash., the dead soldier's family has been notified but that the Defense Department was not immediately releasing his name.

Officials were looking into the possibility of a suicide attack — which would be a first for the Philippines — though some suggested the powerful bomb went off prematurely. ABS-CBN television reported that similar bombs have been used by suicide bombers in the Middle East.

"The driver of the motorcycle loaded with the bomb stopped and was checking something in his motorcycle when the bomb exploded," Purificacion said.

U.S. Army Capt. Catherine Morelle-Oliveria, spokeswoman for the U.S. forces in Zamboanga, said the Green Berets had stopped to buy food at the restaurant when the explosion occurred.

The injured American was initially treated by U.S. military medics and was later flown outside the country for further evaluation, she said. The body of the slain Green Beret was to be flown to Okinawa, Japan.

RMN radio reported that the motorcycle driver was identified as a 33-year-old man from Dipolog city in Zamboanga province.

In early September, the government said it was intensifying security after a suspected al Qaeda member told U.S. interrogators that the terror group planned to attack unspecified targets in the Philippines.

Communist rebels, who have staged a series of attacks over the last week, also said Wednesday that Philippine military and police camps were targets for guerrilla strikes. Police walked sniffer dogs through an elevated train line in Manila after receiving reports communist rebels might stage an attack there Wednesday.

GMA7 television reported that a homemade bomb also went off Wednesday near the police provincial headquarters in Imus, in Cavite province south of Manila, damaging a parked car but causing no injuries.

A Philippine military official said officials were trying to see if the two situations were linked to the blast in Zamboanga, about 530 miles south of Manila.

More troops were being sent to Zamboanga, and checkpoints set up on major roads and outside the city's power plant.

A total of 272 American soldiers remain in the Philippines since the bulk of a 1,200-strong contingent began withdrawing after a counterterrorism exercise ended July 31.

Some U.S. troops have stayed on at Camp Enrile, and 250 others at the Southern Command base, about two miles away, working on security assistance and humanitarian programs.

U.S. military support helped Filipino troops decimate the Abu Sayyaf with a monthslong offensive over the summer on Basilan but is now fighting an Abu Sayyaf faction on another island nearby, Sulu.