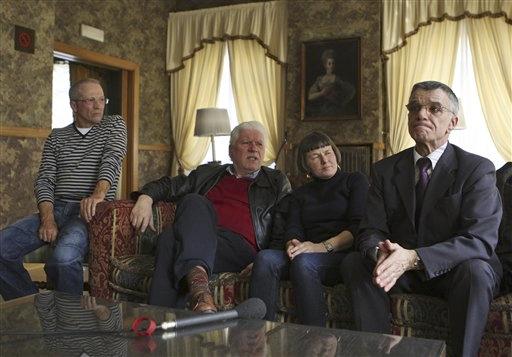 Members of the Army reserve unit at the center of the Abu Ghraib prison scandal returned home from Iraq to a patriotic welcome, with their commanding officer saying their accomplishments shouldn't be overlooked.

"We've done a lot of really, really good things," Capt. Donald J. Reese, commander of the 372nd Military Police Company, said Monday as more than 100 members of the company, based in Cresaptown, Md., were reunited with their families at the Fort Lee Army base in Petersburg.

Meanwhile, the general who headed the U.S. military prison at Abu Ghraib said in an interview broadcast Tuesday that there had been a conspiracy to prevent her knowing about prisoner abuse there.

The prisoner abuse scandal burst into public view this spring when photographs surfaced showing beatings and humiliations of Iraqis held at Abu Ghraib near Baghdad. Many of those implicated said they were only following orders.

Brig. Gen. Janis Karpinski, who was suspended by the Pentagon in May, has denied knowing about any abuse at the prison until the photographs surfaced at the end of April. U.S. investigators have not implicated Karpinski directly in any of the abuses.

One of the reservists charged in the scandal, Pfc. Lynndie England, is facing a military hearing to begin Tuesday at North Carolina's Fort Bragg that will begin gathering evidence to see if the 21-year-old Army reservist should be court-martialed for her actions. Another, Spc. Jeremy C. Sivits, has pleaded guilty and been sentenced to a year in prison.

In Petersburg, family members in bleachers screamed and waved flags as the reservists marched into an old airplane hangar, many with solemn expressions on their faces. A giant American flag hung from the rafters and a military band played patriotic songs. Some in the crowd held signs with message like "We love our MP's" and "God bless that you're safe."

After listening to a brief ceremony, the soldiers hugged family members and did not speak with the media, although the Army said some members will be available later this week. There was no mention of the prison abuse scandal during the ceremony.

Reese later said that the scandal, which has ensnared seven company members, "definitely made it more difficult, but we got through it. I'm sure the military justice system will sort it all out."

The welcoming celebration also included several speakers, among them Maj. Gen. Karol A. Kennedy, commander of the Army Reserve's 99th Regional Readiness Command. "You make me incredibly proud to be an American," she told the unit.

Fort Lee spokeswoman Sandra Ellis said the unit will spend five to seven days at Fort Lee in a "decompression" period that will allow the soldiers to adjust to civilian life and "talk about all the experiences" they have gone through, she said.

The unit deployed to Kuwait on May 15, 2003, and began training new Iraqi police officers and helping to set up a local police academy, Army officials said. The unit was transferred to Abu Ghraib prison in October 2003, with some working in the detention center and others helping rebuild police stations, courts and schools.

Tuesday's hearing will be the first chance in court for England's attorneys to make their case that she was following orders from higher-ups when she was photographed mocking naked detainees at Abu Ghraib.

Witnesses on a list the defense released earlier this year included Vice President Dick Cheney, Defense Secretary Donald Rumsfeld and top generals, although military officials say it is doubtful they will appear. Other witnesses may be called by telephone from Iraq.

"The question is where the path leads," Eugene Fidell of the National Institute of Military Justice told CBS News Correspondent Mark Strassmann. "Will there be evidence adduced at the Article 32 investigation that leads to others up the chain of command?

"And I'm sure that we'll all be following that to see if the dots that everybody has sort of discerned actually connect."

England, from Fort Ashby, W.Va., is seen smiling for the camera in one picture, cigarette in her mouth, as she leans forward and points at the genitals of a naked, hooded Iraqi. Another photo shows her holding a leash that encircles the neck of a naked Iraqi man lying on his side on a cellblock floor, his face contorted.

England is charged with 13 counts of abusing detainees and six counts stemming from possession of sexually explicit photos, which the Army has said do not depict Iraqis. The maximum possible sentence is 38 years in prison.

"The government has leveled their sights on Ms. England," civilian defense lawyer Rhidian Orr said last week. "I feel that the U.S. government is taking full control of the issue and attacking Ms. England when she's not necessarily to blame."

Karpinski echoed that sentiment in her interview Tuesday with British Broadcasting Corp. radio. She said had information suggesting officials took action to keep her in the dark about the mistreatment.

Asked whether she believed there had been a conspiracy at senior level to stop her knowing what was going on, Karpinski said: "Correct."

"From what I understand ... it was people that had full knowledge of what was going on out at Abu Ghraib who knew that they had to keep Janis Karpinski from discovering any of those activities," she added.

Asked whether she thought the conspiracy reached up to the Pentagon or the White House, she said: "The indication is that it may have."