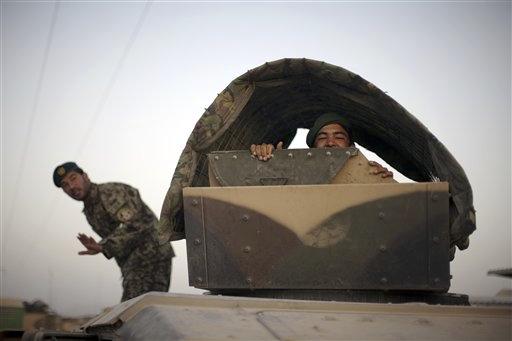 An Army reservist who appeared in several of the most infamous abuse photos taken by guards at Abu Ghraib prison was sentenced Tuesday to six months in prison for her role in the scandal that rocked the U.S. military's image at home and abroad.

The sentence for Spc. Sabrina Harman came a day after she was convicted on six of the seven counts she faced for mistreating detainees at the Baghdad lockup in late 2003. She faced a maximum of five years in prison, though prosecutors asked the jury to give her three years.

With credit for time served, Harman's actual sentence will be just more than four months.

Harman, 27, of Lorton, Va., was the second U.S. soldier tried and convicted in the scandal.

"As a soldier and military police officer, I failed my duties and failed my mission to protect and defend," Harman said, her voice cracking. "I not only let down the people in Iraq, but I let down every single soldier that serves today.

"My actions potentially caused an increased hatred and insurgency towards the United States, putting soldiers and civilians at greater risk," she continued. "I take full responsibility for my actions ... The decisions I made were mine and mine alone."

The jury of four Army officers and four senior enlisted soldiers deliberated for less than four hours Monday before convicting Harman on one count of conspiracy to maltreat detainees, four counts of maltreating detainees and one count of dereliction of duty.

Harman, a former pizza shop manager from Lorton, Virginia, appeared in several of the most notorious photos taken at Abu Ghraib, and she was found guilty of taking other pictures.

The photos showed prisoners chained together in sexual poses, piled on the floor naked and forced to form a nude human pyramid.

In one picture, Harman posed with Graner behind a group of naked detainees. In another, she was shown with a prisoner on whose leg she is accused of writing "rapeist."

In closing arguments Monday, prosecutors said Harman and other guards conspired to physically hurt and sexually humiliate the prisoners under their watch.

"They were all acting together for their own amusement," Capt. Chris Graveline said. "There was no justification for what they did that night."

Graveline said the group took pictures of what they were doing "so they could remember that night, so they could laugh again at these men. ... There's nothing funny about what happened at Abu Ghraib."

Defense lawyer Frank Spinner said Harman was a novice soldier who received virtually no training before going to work at the chaotic and overcrowded prison as part of the Maryland-based 372nd Military Police Company.

"Shame on the Army for putting an ill-equipped, ill-trained junior specialist in a position where she had to challenge her (enlisted) leadership to do the right thing," he said. "This is not one of the Army's finest moments."

The final witness was Kelly Bryant, Harman's roommate in Virginia, who read part of a letter Harman wrote home in late October 2003.

In the letter, Harman said she took pictures of detainee abuse at Abu Ghraib because she was opposed to the treatment and wanted to document the wrongdoing.

"At first I thought it was funny, but these people are going too far," Harman wrote. "Kelly, it's awful. I thought I could handle anything, but I was wrong."

Harman wrote that her initial amusement at how detainees were sexually mistreated gave way to the realization that her fellow soldiers were engaged in illegal activity.

"It hit me it was a form of molestation — you can't do that," she wrote. "What if that was me in their shoes?"

Six co-defendants have made plea bargains. The reputed ringleader, Pvt. Charles Graner Jr., was convicted in January and is now serving a 10-year sentence in an Army prison.

Pfc. Lynndie England, the most recognizable Abu Ghraib defendant, also reached a plea deal, but it was thrown out after Graner's testimony contradicted England's assertion that she knew her actions were wrong.