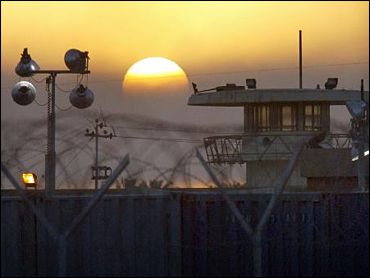 A military jury on Thursday convicted an Army dog handler of using his animal to torment a prisoner at Abu Ghraib.

Sgt. Santos A. Cardona is the 11th soldier convicted of crimes stemming from the abuse of inmates at the prison in late 2003 and early 2004.

Cardona, 32, of Fullerton, Calif., was convicted of dereliction of duty and aggravated assault for allowing his dog to bark within inches of a prisoner's face.

But the panel of four officers and three enlisted soldiers acquitted Cardona of some of the most serious charges he faced, including unlawfully having his dog bite an inmate and conspiring with another dog handler to frighten prisoners into soiling themselves.

Cardona, a 12½-year veteran, stood at attention in his green dress uniform as the verdict was read. He faces a maximum penalty of 3½ years.

A sentencing hearing was scheduled to begin later Thursday.

Prosecutors portrayed Cardona as part of a small group of corrupt soldiers who enjoyed tormenting prisoners.

"This is all for their amusement," Maj. Christopher Graveline said in closing arguments.

Although none of the offenses was alleged to have occurred during interrogations, Cardona's defense team focused on interrogation policies, including three memos issued in a month's time by Lt. Gen. Ricardo S. Sanchez, then commander of U.S. forces in Iraq.

The memos authorized harsher interrogation techniques such as stress positions, sleep deprivation and dogs at Abu Ghraib — but only with written authorization.

The changing policies confounded Col. Thomas M. Pappas, an intelligence officer who assumed the prison's management in late 2003. Pappas was reprimanded last year for approving a request to use dogs in an interrogation without Sanchez' approval — something Pappas testified he believed at the time the policy allowed.

"We were all confused at one time or another," Pappas testified.

Cardona and four other dog-handling teams arrived in November 2003.

By late November, Defense Secretary Donald Rumsfeld and Deputy Secretary Paul Wolfowitz were said to have taken an intense interest in gathering intelligence from Abu Ghraib, even calling nightly to check on information, according to trial testimony.

"They're people that hold your careers in their hands," Volzer said in closing arguments.

Ten low-ranking soldiers, including fellow dog-handler Sgt. Michael Smith, have been convicted in the Abu Ghraib scandal, in which detainees were abused and photographed in painful or sexually humiliating positions. Smith was sentenced to 179 days in prison.