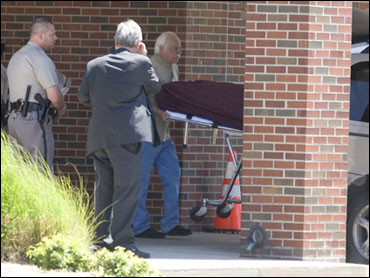 Dr. George Tiller, one of the nation's few providers of late-term abortions despite decades of protests and attacks, was shot and killed Sunday in a church where he was serving as an usher.

The gunman fled, but a 51-year-old suspect was detained some 170 miles away in suburban Kansas City three hours after the shooting, Wichita Deputy Police Chief Tom Stolz said.

Although Stolz refused to release the man's name, Johnson County sheriff's spokesman Tom Erickson identified the detained man as Scott Roeder. He has not been charged in the slaying and was expected to be taken to Wichita for questioning.

Police did not release a motive for the shooting. But the doctor's violent death was the latest in a string of shootings and bombings over two decades directed against abortion clinics, doctors and staff.

Long a focus of national anti-abortion groups, including a summer-long protest in 1991, Tiller was shot in the foyer of Reformation Lutheran Church. Tiller's attorney, Dan Monnat, said Tiller's wife, Jeanne, was in the choir at the time.

The U.S. Marshals service increased security around some other prime targets in the abortion sphere following Tiller's murder.

"I can confirm Attorney General Holder has directed the U.S. Marshals Service to increase security for a number of individuals and facilities following the murder," spokesman Jeff Carter told CBS News. "I cannot disclose the subjects of our security efforts as it is the policy of the U.S. Marshals not to comment on the status of any protective detail."

Tiller was one of the most demonized by the extremist wing of the anti abortion rights movement, reports CBS News correspondent Bianca Solorzano.

"For years he's been the number one target, or certainly one of the principle targets," Ellie Smeal, president of the Feminist Majority Foundation told Solorzano.

But it was not enough to deter him from his practice.

Asked after the assassination attempt if it was going to change the way he does business, Tiller replied, "I don't think so. I have the wonderful opportunity to help people everyday."

"He had been from 1993 until now very harassed and threatened. He had been vandalized repeatedly," Smeal told Solorzano."He went to work in an armored car. He knew the danger he was in."

The slaying of the 67-year-old doctor is "an unspeakable tragedy," his widow, four children and 10 grandchildren said in statement. "This is particularly heart-wrenching because George was shot down in his house of worship, a place of peace." 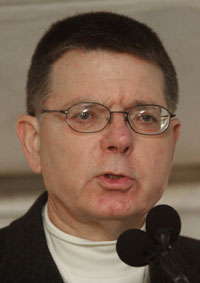 The family said its loss "is also a loss for the city of Wichita and women across America. George dedicated his life to providing women with high-quality health care despite frequent threats and violence."

Stolz said all indications were that the gunman acted alone, although authorities were investigating whether he had any connection to anti-abortion groups.

Tiller's Women's Health Care Services clinic is one of just three in the nation where abortions are performed after the 21st week of pregnancy. The clinic was heavily fortified and Tiller often traveled with a bodyguard, but Stolz said there was no indication of security at the church Sunday.

Anti-abortion groups denounced the shooting and stressed that they support only nonviolent protest. The movement's leaders fear the killing could create a backlash just as they are scrutinizing U.S. Supreme Court nominee Sonia Sotomayor, whose views on abortion rights are not publicly known.

"We are shocked at this morning's disturbing news that Mr. Tiller was gunned down," Troy Newman, Operation Rescue's president, said in a statement. "Operation Rescue has worked for years through peaceful, legal means, and through the proper channels to see him brought to justice. We denounce vigilantism and the cowardly act that took place this morning."

President Barack Obama said he was "shocked and outraged" by the murder. "However profound our differences as Americans over difficult issues such as abortion, they cannot be resolved by heinous acts of violence," he said.

At Tiller's church, Adam Watkins, 20, said he was sitting in the middle of the congregation when he heard a small pop at the start of the service.

"We just thought a child had come in with a balloon and it had popped, had gone up and hit the ceiling and popped," Watkins said.

Another usher came in and told the congregation to remain seated, then escorted Tiller's wife out. "When she got to the back doors, we heard her scream, and so we knew something bad had happened," Watkins said.

He said the service continued even after an associate pastor announced that Tiller had been injured. "We were just really shocked," he said. "We were kind of dumbfounded. We couldn't really believe it had happened."

Tiller had in the past endured threats and violence. A protester shot Tiller in both arms in 1993, and his clinic was bombed in 1985. More recently, Monnat said Tiller had asked federal prosecutors to step up investigations of vandalism and other threats against the clinic out of fear that the incidents were increasing and that Tiller's safety was in jeopardy. Stolz, however, said police knew of no threats connected to the shooting.

In early May, Tiller had asked the FBI to investigate vandalism at his clinic, including cut wires to surveillance cameras and damage to the roof that sent rainwater pouring into the building.

In 1991, the Summer of Mercy protests organized by Operation Rescue drew thousands of anti-abortion activists to this city for demonstrations marked by civil disobedience and mass arrests.

Tiller began providing abortion services in 1973. He acknowledged abortion was as socially divisive as slavery or prohibition but said the issue was about giving women a choice when dealing with technology that can diagnose severe fetal abnormalities before a baby is born.

"Dr. Tiller's murder will send a chill down the spines of the brave and courageous providers and other professionals who are part of reproductive-health centers that serve women across this country. We want them to know that they have our support as they move forward in providing these essential services in the aftermath of the shocking news from Wichita," Keenan said.

The last killing of an abortion doctor was in October 1998 when Dr. Barnett Slepian was fatally shot in his home in a suburb of Buffalo, N.Y. A militant abortion opponent was convicted of the murder.

Tiller's clinic is fortified with bulletproof glass, and Tiller hired a private security team to protect the facility. Once outside the clinic, Tiller was routinely accompanied by a bodyguard.

At a recent trial, he told jurors that he and his family have suffered years of harassment and threats and that he knew he was a target of anti-abortion protesters.

Federal marshals protected Tiller during the 1991 Summer of Mercy protests, and he was protected again between 1994 and 1998 after another abortion provider was assassinated and federal authorities reported finding Tiller's name on an assassination list.

Tiller remained prominent in the news, in part because of an investigation begun by former Kansas Attorney General Phill Kline, an abortion opponent.

Prosecutors had alleged that Tiller had gotten second opinions from a doctor who was essentially an employee of his, not independent as state law requires. A jury in March acquitted Tiller of all 19 misdemeanor counts.

"I am stunned by this lawless and violent act, which must be condemned and should be met with the full force of law," Kline said in a statement. "We join in lifting prayer that God's grace and presence rest with Dr. Tiller's family and friends."