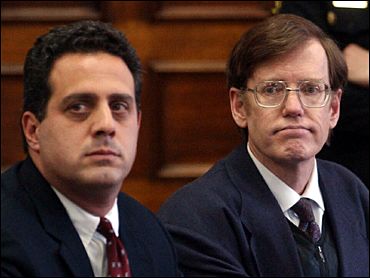 The anti-abortion activist who shot Dr. Barnett Slepian through the window of his suburban Buffalo home in 1998 was given the maximum sentence allowed, 25 years to life, Friday. James Kopp still faces a federal trial.

Convicted in March of second-degree murder, Kopp, 48, could have received a minimum of 15 years in prison.

"It's clear the act is premeditated, there is no doubt about it," Erie County Court Judge Michael D'Amico told Kopp. "You made an attempt to avoid responsibility for the act. What may appear righteous to you is immoral to someone else."

The anti-abortion extremist, who did not testify at his murder trial, addressed the court before he was sentenced, saying he had only meant to wound Slepian. Lynne Slepian and three of the couple's four sons were in the courtroom.

"I have separated murderers from their weapons of mass destruction. I wish I could do 10 life sentences or 10 death penalties to save them," he said, referring to unborn children.

Prosecutor Joseph Marusak said Lynne Slepian, along with other family members, submitted letters to the judge in advance of the sentencing.

The prosecutor said the law prevented him from revealing the contents of pre-sentencing letters.

Kopp had admitted to firing the fatal shot from a rifle equipped with a scope.

Kopp still faces a federal trial for interfering with the right to an abortion. He's also a suspect in the nonfatal shootings of four other abortion providers in Canada and western New York between 1994 and 1997.

"A strong message must be sent to anti-choice extremists that murdering an abortion provider is never justifiable," said Vicki Saporta, the organization's president and chief executive.

Kopp was convicted following an unusual one-day non-jury trial. At Kopp's request, instead of hearing witness testimony, D'Amico was presented with a 35-page list of facts agreed to by both sides — including an admission by Kopp that he fired the shot that struck Slepian.

Barket had argued that Kopp, who believed in the use of force to prevent abortions, meant only to wound the 52-year-old obstetrician/gynecologist.

Marusak countered that Kopp's actions, including his choice of weapon — a Russian-made, scope-equipped assault rifle — and the use of aliases in buying it, pointed to an intention to kill.

Kopp was lying in wait behind Slepian's suburban Amherst home Oct. 23, 1998, and fired once through a rear kitchen window after the doctor returned from a memorial service for his father. Slepian's wife and four sons were home at the time.

A suspect soon after the shooting, Kopp fled to Mexico and then Ireland and was one of the FBI's most-wanted fugitives until his capture in France in 2001.

He is a suspect in the nonfatal shootings of four other abortion providers in Canada and Rochester between 1994 and 1997.