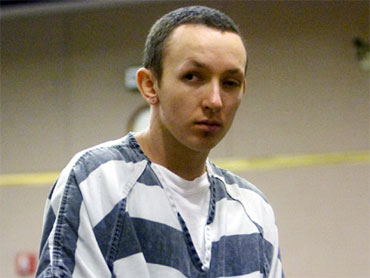 VERNAL, Utah (CBS/AP) Aaron Harrison, of Naples, Utah, was sentenced Tuesday to up to five years in prison for beating a pregnant girl to try to cause a miscarriage.

It's horrible, but the strange twist to this crime is the expectant mother actually paid Harrison to do it, say police.

Prosecutors said a 17-year-old Uintah County girl paid Harrison $150 to beat her after her boyfriend threatened a breakup if she didn't get rid of the child.

Harrison brought the girl, who was seven months pregnant, to his home in May. He then attacked her, leaving bruises on her stomach and a bite mark on her neck, court records said. The baby survived and was born in August.

Harrison, 21, had pleaded guilty to second-degree felony attempted murder, which is punishable by up to 15 years in prison. But District Judge A. Lynn Payne instead sentenced him under Utah's anti-abortion statute, saying a charge of third-degree "attempted killing of an unborn child" better fit the facts of the case, The Salt Lake Tribune reported on its Web site.

"I don't think words can describe the kind of depraved conduct you entered into in trying to take the life of a child," Judge A. Lynn Payne told Harrison on Tuesday.

Harrison also was sentenced Tuesday in four unrelated cases, three of which involved third-degree felonies. He could serve up to 20 years total.

The girl, who wasn't identified because she was a juvenile, pleaded no contest in June to a second-degree felony count of criminal solicitation to commit murder. Juvenile Court Judge Larry Steele ordered her to be placed in the custody of Utah Juvenile Justice Services until she was 21.

But Steele this month had the girl released from jail after ruling that she was seeking an abortion and was therefore not criminally liable.

Steele called the girl's actions "shocking and crude" in a ruling. But he said that under state law, "a woman who solicits or seeks to have another cause an abortion of her own unborn child cannot be criminally liable."

The judge granted attorney Rich King's motion to withdraw the girl's plea and release her from detention. King contends the teen didn't do what prosecutors allege and wouldn't be liable if she did.

The girl, who is now 18, is seeking custody of the baby, the Tribune reported.

What do you think? Should the mother be criminally liable for seeking an abortion by having someone beat the fetus through her belly? Should she be allowed custody of her child?