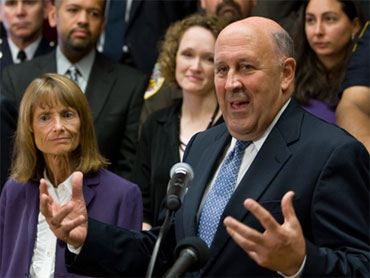 A federal judge has ruled Virginia's ban on a type of late-term abortion is unconstitutional, striking down a law that uses language mirroring the federal ban signed into law last year.

Virginia's law made illegal what opponents call partial-birth abortion, a procedure generally performed in the second or third trimester in which a fetus is partially delivered before being killed.

Williams said the law violated privacy rights and failed to make an exception for the health of the woman. He also challenged the use of the term "partial birth infanticide" by the law's backers, saying it was an attempt to alarm the public.

Lawyers for the Center for Reproductive Rights, who filed the suit, argued that the Virginia law was unconstitutional because it disregarded a four-year-old Supreme Court ruling allowing the procedure when the health of the mother is threatened.

"Courts across the country - including the U.S. Supreme Court - have been clear that such bans are an unconstitutional threat to women's health and lives," Nancy Northup, president of the center, said in a statement Monday.

The group said the lawsuit was a precursor to a challenge to the limited federal ban, which is already being challenged in Nebraska, New York and California. About 30 states have enacted versions of so-called partial birth abortion bans, but in many cases they have been overturned in court.

The suit alleged that Virginia's "vaguely defined" ban could subject doctors to criminal prosecution even for safely performing a more common type of second-trimester abortion known as "dilation and evacuation," as well as obstetrical procedures that help women suffering miscarriages.

The law's backers claimed it specifically targeted procedures that take place once the fetus has emerged from the birth canal.