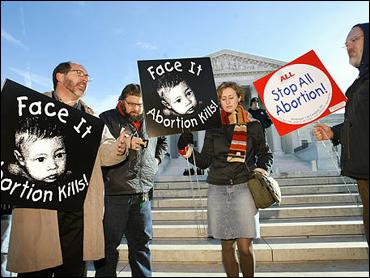 The Supreme Court Wednesday turned its attention to new controversies surrounding the High Court's own historic decisions on abortion rights and Miranda rights.

With the return of the issue to the court's docket, abortion protesters took up familiar spaces on its steps.

Two small groups of demonstrators from either side of the abortion debate carried signs. The pro-abortion rights group chanted. The leader of the anti-abortion rights contingent warned that the court's decision could affect their right to continue protesting.

Both cases to be argued Wednesday concern civil penalties. In one, anti-abortion rights advocates say it is unconstitutional for the courts to award damages under racketeering law against protesters who block clinics. In the other, the issue is whether a person can sue individual police officers for failing to read a suspect his or her Miranda rights.

In the abortion case, the justices will revisit an issue they first dealt with nine years ago when they ruled that anti-abortion groups and demonstrators could be sued in a private lawsuit under the 32-year-old Racketeer Influenced and Corrupt Organizations Act, known as RICO — originally used against organized crime.

The RICO statute allows the abortion groups to be sued, and potentially to pay treble damages, for being part of a criminal enterprise in which the crimes are individual acts against clinics and providers.

The case being argued Wednesday raises free-speech questions about violent or threatening political and social protests. While it does not involve the constitutionality of abortion, emotion from abortion rights supporters and foes has spilled into court filings.

The Supreme Court is hearing appeals from Operation Rescue, anti-abortion leader Joseph Scheidler and others who were ordered to pay damages to abortion clinics and barred from interfering with their businesses for 10 years.

The groups were sued by the National Organization for Women and abortion clinics in Milwaukee and Wilmington, Del., over what they described as violent tactics.

Lower courts found that the protesters illegally blocked clinic entrances, menaced doctors, patients and clinic staff and destroyed equipment during a 15-year campaign to limit or stop abortions at several clinics. They were ordered to pay $257,780 in damages.

Dozens of organizations and individuals have chosen sides. Actor Martin Sheen, People for the Ethical Treatment of Animals and four states are among supporters of the protesters. On the other side are nine states, several prosecutor groups, abortion clinic bombing victim Emily Lyons, and others.

Justices must differentiate between protected political activity and that which is illegal. The ruling is expected before next summer.

The Miranda case involves an Oxnard, Calif., police sergeant, Ben Chavez, and a man who was shot by police, Oliverio Martinez. In Nov. 1997, Martinez was stopped and frisked by two narcotics cops.

He was found to be carrying a weapon and a struggle ensued, in which police claim Martinez reached for an officer's gun. Martinez was shot five times; one bullet blinded him and another paralyzed his legs.

After the suspect was rushed to the hospital, Chavez questioned Martinez off and on for 45 minutes, without reading him his rights and while the suspect complained of being in pain. Martinez admitted to grabbing for the gun. He was never charged with a crime.

Martinez then sued Chavez for a wrongful interrogation. Lower courts found Chavez was liable, and that the qualified immunity usually granted to police officers for actions they take while on duty did not apply. Supporters of the police officer contend that immunity should apply, and that no damages should be awarded because none of the statements Martinez made were used to prosecute him.