Robert Hendin Reports From Aboard The Inauguration Train

(AP)
On the way to Wilmington, Mr. and Mrs. Obama went to the balcony of their caboose and waved to the hundreds of people gathering along the tracks to get a glimpse. Obama seemed to take joy in pulling cord chiming the train's whistle.

Once in Wilmington, Delaware, it was reunion of sorts for the Biden clan as he waxed poetically about his daily train commute to DC. He reminisced about calling the station to tell him he on the way and to see if the train was on-time.

Click Here For All Of CBSNews.com's Special Inauguration Coverage 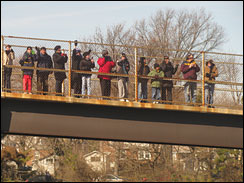 (Robert Hendin/CBS)
It was also a homecoming for CBS News's chief White House Correspondent Chip Reid. As a native of Wilmington, he spent time working on Biden's presidential campaign in 1987. Chip was recognized by many in the crowd and spent time talking to Joe Biden's sister Valerie, who calls herself the "Vice-Sister" 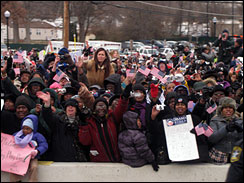 (Robert Hendin/CBS)
Thousands of folks braved the cold to see the Obama-Biden team together. After a short speech, The Obamas and the Bidens climbed aboard the train and its now rolling down to Baltimore.

Not only do police cars dot the landscape every few miles along the train tracks, there has been a military helicopter flying overhead and coast guard boats are patrolling the bay on the train's left side.