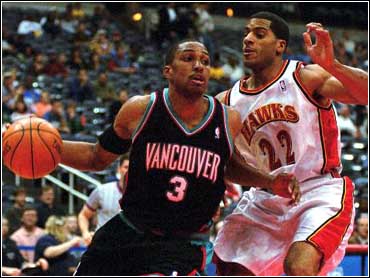 Shareef Abdur-Rahim of the Vancouver Grizzlies has been selected for the final spot on the U.S. Olympic basketball team, replacing the injured Grant Hill.

The USA Basketball selection committee made the decision Tuesday, and Abdur-Rahim's agent confirmed Wednesday that the star forward will accept the spot. Kobe Bryant of the NBA champion Los Angeles Lakers was the early choice to replace Hill, but his wedding plans kept him for making the commitment.

The U.S. team begins training camp in late August, and the Sydney Games will run from mid-September to Oct. 1.

Abdur-Rahim was a unanimous choice, a member of the selection committee told The Associated Press on the condition of anonymity.

Abdur-Rahim got the news while at home in Atlanta.

"He feels a sense of recognition. He's extremely happy," said agent Aaron Goodwin, whose client plays for one of the NBA's worst teams in one of its smallest markets.

Abdur-Rahim's selection came as a bit of a surprise, but only in part because Bryant and Charlotte's Eddie Jones were mentioned as the most likely replacement for Hill.

The committee, however, decided to go with a bigger player to fill the void at small forward.

Abdur-Rahim, 23, averaged 20.3 points and 10.1 rebounds for the Grizzlies last season, his fourth in the NBA. The 6-foot-9 former California star can play either forward position for the Olympic team, backing up bigmen Alonzo Mourning, Tim Duncan, Kevin Garnett and Vin Baker.