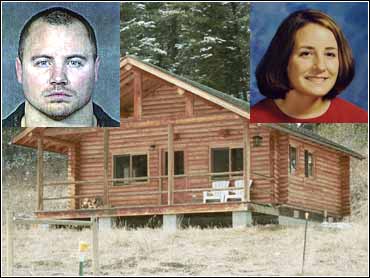 Kidnapping victim Anne Sluti came home Friday, a week after the 17-year-old was whisked away from a local mall parking lot and kept hostage hundreds of miles away in Montana.

With a bruise under her right eye and an FBI baseball cap on her head, Sluti stepped off a private jet with her parents and brother. A small group of family members and friends shrieked with excitement.

"Thank God she's alive," said her aunt Sue Daniel. She placed a sign in the dashboard of her minivan that showed a happy face and said "Welcome Home, Anne."

"I'm just happy to get back home," Sluti said earlier in the day as the family prepared to leave Kalispell, Mont. "I want to thank everyone who helped me get home safely."

Remarked her mother, Elaine Sluti, "Someone at the hotel said to me this morning, 'Have a good day.' Believe me, we are having a very good day."

More than 200 people attended a celebration Friday at the University of Nebraska-Kearney, where Sluti's father, Don, is an associate professor of management and marketing. They joined hands, circled the university's bell tower and observed a silent prayer in support of the family.

She was finally freed about 3 a.m. Thursday after more than five days in captivity. The ordeal ended with a 10-hour standoff at a lakeside cabin in Rollins, Mont., 900 miles from Kearney. Her alleged abductor, Anthony Zappa, a fugitive wanted for various crimes in several states, was arrested and charged with kidnapping.

Authorities on Thursday were calling the honors student "very clever and very brave" and said she was instrumental in persuading Zappa to surrender. Police said Sluti worked the phone during the standoff, confidently relaying each side's reassurances and demands.

Zappa wouldn't speak to authorities surrounding the cabin until minutes before the surrender, but it was clear he was hovering over Sluti while she talked, Lake County Undersheriff Mike Sargeant said.

She never referred to Zappa by name until the end.

"Can I talk to Tony?" Sargeant asked.

"That's entirely up to him," Sargeant recalled Sluti saying.

"I could almost envision her thrusting the phone toward him, and she said 'Talk to them, Tony,"' he said.

Zappa's voice was almost a whisper when he spoke.

"I'm scared they're going to shoot me," Zappa said, according to Sargeant. He made two demands, Sergeant said: He didn't want officers to shoot him, and he wanted to serve his prison time in Minnesota.

He had eluded authorities since February for failing to appear in Minnesota on a burglary charge, and at one point, police closed the Mall of America near Minneapolis after he was spotted.

The day after she was kidnapped, Sluti tried to phone family and friends but was cut off, police said. On Sunday, her 911 call got through and was traced to a cabn near Yellowstone National Park, but police found it empty.

Authorities linked Zappa to the abduction through a stolen sport utility vehicle believed used in the kidnapping and found abandoned in Montana, not far from where a blue Toyota Tercel had been stolen.

On Wednesday, a landlord tipped off police to the cabin on Flathead Lake after reporting an unfamiliar car nearby. It was a blue Tercel.